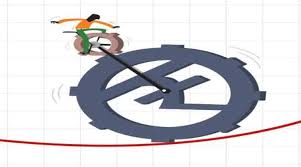 India’s economic growth likely accelerated to 6.6 percent in the quarter just ended, but analysts polled by Reuters are sounding increasingly worried that confusion over a new goods and services tax will dampen activity in coming months.

The forecast, from a survey of over 40 economists taken over the past week, compares with growth of 6.1 percent in the first three months of the year, the slowest pace in two years. The range of forecasts was wide from 5.7 percent to 7.2 percent.

It would leave Asia’s third-largest economy behind China, which last reported growth of 6.9 percent, but still among the world’s top performing economies.

While the economy has clearly bounced back from the cash shock, forecasters in the latest Reuters poll said the pickup may be short-lived. The 6.6 percent growth forecast is down from 6.9 percent expected in a survey taken in July.

Uncertainty over how smoothly the new Goods and Services Tax (GST) will be implemented remains large and tough to forecast. It was launched on July 1 to harmonise various value-added tax regimes across states in India to one national standard.

It has primarily hit micro-, small-, and medium-sized businesses that were showing some signs of stabilisation before demonetisation and the launch of the GST, said Rupa Rege Nitsure, chief economist at Larson and Toubro Finance Holdings.

“This, combined with the ongoing stresses in large corporates, will certainly drag down gross domestic product growth,” said Nitsure.

“Most of the policy moves or structural reforms introduced recently are more suited for normal or boom times rather than to the current phase of slowdown. Hence, they are accentuating the intensity of the downturn.”

Confusion among businesses over how to price their goods and services is partly responsible for a contraction in both India’s manufacturing and service sector activity in July. Industrial production also fell.

Factory activity is forecast to have remained in a rut in August, though may show some signs of recovery. The August Purchasing Managers’ Index (PMI) is forecast at 49.3 versus 47.9 in the previous month. Any number below 50 suggests contraction.

The Reserve Bank of India earlier this month became the first major central bank in Asia to cut interest rates this year, using room provided by slumping inflation. But it kept the market guessing on whether there’s more space for trimming.