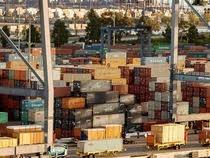 India’s trade deficit narrowed to $ 11.45 billion in July from a month ago, following a slowdown in merchandise imports, government data showed on Monday.

Asia’s third-largest economy imported goods worth $ 33.99 billion last month, up 15.42 percent from a year ago. The figure was lower than imports of $ 36.52 billion in June.

Gold imports, however, in July nearly doubled from last year to $ 2.1 billion. Merchandise exports for July came in at $ 22.54 billion, up 3.94 percent year-on-‘