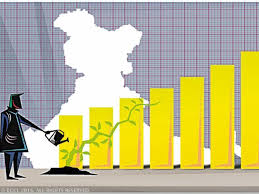 In its mid-year economic survey, Chief Economic Adviser Arvind Subramanian said there were downside risks to the official growth forecast of 6.75-7.5 percent for the fiscal year to March 2018.

Growth slowed to 6.1 percent in the March quarter, hitting its lowest in more than two years following a radical monetary reform that purged high-value banknotes from circulation.

The subsequent launch of a national Goods and Services Tax (GST) has caused chaos on the ground as ambiguous rules have left firms confused on how to price their products.

In a sign of things to come, business surveys showed both services and manufacturing contracting at their fastest rate in years in July, the month that the GST was launched.

Disinflationary pressures allowed the Reserve Bank of India last week to cut its main policy rate – the first easing by an Asian central bank this year – by 25 basis points to 6 percent, the lowest since November 2010.

Yet the report by Subramanian, a top adviser to Finance Minister Arun Jaitley, saw “considerable” scope for further easing as the policy repo rate was 25-75 basis above the neutral rate.

The survey also said inflation was expected to remain below the Reserve Bank of India’s medium-term target of 4 percent through to the end of March 2018. Retail inflation cooled to 1.54 percent, its lowest level in more than five years.