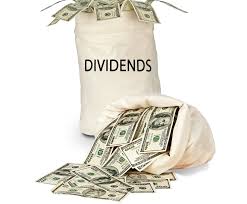 Bank dividends are near all-time highs

President Trump has condemned the Dodd-Frank rules placed on Wall Street as a “disaster” that have prevented banks from lending money to cash-starved businesses.

House Republicans responded by passing the Financial Choice Act, a bill that would gut many of Dodd-Frank’s post-crisis safeguards in an effort to accelerate the sluggish U.S. economy.
But banks have more cash than they know what to do with these days. American banks raked in record profits last year.

More tellingly, banks handed out $ 102.8 billion in dividends to shareholders in 2016, according to the FDIC. That’s the third-highest amount on record, going back to 1984. It is just shy of the all-time high of $ 110.4 billion shelled out in 2007, the year before the financial meltdown.

Bank dividends crumbled in half in 2008, sinking to $ 51.1 billion, FDIC stats show. But they rebounded steadily following that, even after Congress passed Dodd-Frank in 2010.

“Banks have plenty of extra money for expanding their lending. They choose not to lend that money, instead ‘returning capital’ to their shareholders,” Cornell University law professor Saule Omarova told the Senate banking committee last week.

The financial industry has pushed for relaxed regulation. The Financial Services Roundtable, a lobbying group for big banks, wrote a letter to Senate leaders in April arguing that needless regulation “takes capital away from small business loans, home purchases and other productive uses.”

The dividend payouts “expose the fundamental falsity of the industry’s claims,” Omarova said. She noted that stable and high dividends boost stock prices, which in turn “translates directly into higher bonuses” for execs.

The Financial Services Roundtable did not respond to a request for comment.

Banks are once again itching to ramp up their dividend payouts as a way to entice shareholders to bid up their stock prices. The Federal Reserve is scheduled to rule next week on whether to bless big banks’ plans to boost their dividends and share buybacks.

Of course, there’s nothing evil about dividends. In fact, these payments are a sign of financial health and far preferable to having companies either sit on the money or needlessly spend it.

Yet Nathan Dean, a financial policy analyst at Bloomberg Intelligence, agreed that near-record dividends “undercut the argument that regulation needs to be wholescale revamped.”

To be sure, not all banks are the same. Community banks paid out just $ 10.2 billion in dividends last year, accounting for less than 10% of the industry’s total, according to the FDIC. That supports the case by Republicans and Democrats alike who say Dodd-Frank unfairly hurt community lenders. Even Dodd-Frank author Barney Frank has conceded community banks deserve some relief.

But community bank dividends have been on the rise, increasing during each of the last three years that the FDIC has reported that metric.

Big banks account for the vast majority of the industry’s dividend payouts. JPMorgan Chase (JPM), widely viewed as the healthiest of the big banks, shelled out $ 6.9 billion in dividends last year. That’s on top of $ 8.1 billion in share buybacks, another way to reward investors.

“Dividends encourage investors to provide the capital that supports the bank lending that helps our economy grow,” James Chessen, chief economist at the American Bankers Association, said in a statement.

Chessen said banks could “do even more to support jobs and growth” if Washington fixes certain regulations. This can be done, according to Chessen, without “compromising the progress we have made to improve” banks’ “safety and soundness.”

Related: Trump gives banks (a lot of) what they want

It’s worth noting that despite the rhetoric in Washington, banks are lending plenty. Commercial and industrial loans from commercial banks hit an all-time high of $ 2.1 trillion last November before dipping a bit in recent months, according to the Federal Reserve.

At the same time, there are fewer and fewer banks struggling to stay alive these days. The FDIC’s list of “problem banks” has plunged from a peak of nearly 450 in 2009 to just 123 today.

“Dodd-Frank was a very, very positive thing for the industry. We now have one of the stronger banking industries in the world because of it,” said Charles Peabody, an analyst at Compass Point Research & Trading.