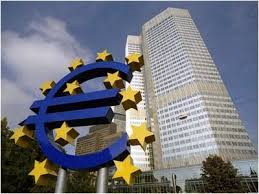 Super Mario is getting ready to take his foot off the gas.

The European Central Bank on Thursday removed any reference to future interest rate cuts from its policy statement thanks to an improving economic outlook for the region.

ECB President Mario Draghi said the latest data point to stronger momentum in the eurozone economy, which is projected to grow faster than previously expected.

In a statement, the ECB said it expects interest rates “to remain at present levels for an extended period.” That’s a change from its previous guidance, which talked about rates at “present levels or lower.”

Central banks play a delicate balancing act of being open about their next steps, while also keeping their options open. That’s why investors pay so much attention to even the most subtle tweak to language.

Related: U.K. growth was weakest in Europe in first quarter

The ECB also left its key interest rates unchanged, and said it would keep a huge stimulus program running until the end of the year “or beyond, if necessary.”

That means it will continue to buy government bonds and other assets worth 60 billion euros ($ 65 billion) a month.

The bank said that while growth is picking up, inflation is still well below the target.

“The economic expansion has yet to translate into stronger inflation dynamics…therefore, a very substantial degree of monetary accommodation is still needed for underlying inflation pressures to build up and support headline inflation in the medium term,” Draghi said.

The euro dropped 0.3% against the dollar after the announcement.

Related: Dollar slumps to lowest of the Trump era

But analysts saw the decision to drop the rate cut wording as a sign that the bank might be getting ready to wind down its stimulus program, which began in March 2015.

Draghi was tight-lipped on when and how this may happen. He also made it clear the bank is ready to step up the bank’s stimulus program again in case the economic situation worsens.

He said the program has supported the growth in Europe. He said that he expects growth in the eurozone to reach 2% in 2017.