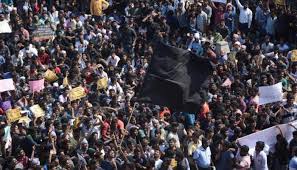 Protesters rally against Islamic law in dozens of U.S. cities

HARRISBURG, Pa. About two dozen rallies were planned across the United States on Saturday to denounce sharia law, the Islamic legal and moral code that organizers say poses a threat to American freedoms, but critics believe the condemnation masks anti-Muslim hatred.

ACT for America, a self-described grassroots organization focusing on national security, has scheduled protests in New York, Chicago, Boston, Denver and Seattle, as well as many smaller cities. Hundreds of people pledged on social media to attend.

At a rally on the steps of the Pennsylvania state capitol in Harrisburg, the atmosphere was tense.

Barricades and a heavy police presence, including officers mounted on horses, separated about 60 anti-sharia demonstrators from an equal number of counter-protesters, many dressed in black masks and hoods and chanting “No Trump, no KKK, no Fascist USA.”

More than a dozen men belonging to the anti-government Oath Keepers were on hand, invited by ACT to provide security. Most of them carried handguns.

Leann Koons, 35, of Ricketts Glen, Pennsylvania, said she came to the rally “because I stand for women’s and children’s rights. I don’t like how they treat women.”

Chris Achey, 47, of Allentown, Pennsylvania, said he did not hate Muslims but believes that much of Islam is incompatible with Western culture.

“The Constitution is the law of the land,” he said. “We have to be careful with who we let in the country.”

The event ended without violence, and police said one counter-demonstrator was arrested.

On its website, ACT described sharia, which covers many aspects of Muslim life including religious obligations and financial dealings, as incompatible with human rights. It said sharia justifies the oppression of women and homosexuality, and advocates female genital mutilation.

But critics say the organization vilifies Muslims and has repeatedly equated Islam with extremism. In their view, the rallies are part of a wave of anti-Muslim and anti-immigrant sentiment fueled by President Donald Trump, who called for a ban on Muslims entering the country during his election campaign.

Molly Freiburg, 33, of Philadelphia, was one of the counter-protesters but not part of the larger group clad in black.

“America is not in danger from sharia law,” she said. “This manifestation at the Capitol is actually a way to make our Muslim neighbors feel uncomfortable.”

A representative for ACT for America could not be reached for comment.

The Council on American-Islamic Relations (CAIR), the country’s largest Muslim advocacy group, urged Americans to participate in one of several local educational events being organized in “a peaceful challenge to Saturday’s hate rallies.”

It also warned Muslims to take extra precautions against potential violence over the weekend.

Anti-Muslim incidents rose 57 percent last year, including a 44 percent jump in anti-Islamic hate crimes, CAIR said in a report released in early May.

Oath Keepers said on its website that it was “answering the call to defend free speech against those who would use terrorist violence or the threat of violence to shut it down.”

The Southern Poverty Law Center says Oath Keepers is “one of the largest radical antigovernment groups in the United States,” organized around a “set of baseless conspiracy theories.”

Refuse Fascism, a coalition of activists advocating confrontational tactics to oppose what it calls the Trump “regime,” said it would show up at the rallies “to counter the xenophobic hatred and lies, defy intimidation and drown it out.”