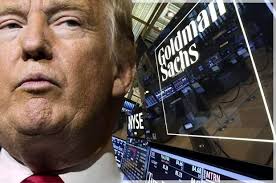 One of the more intriguing subplots around President Donald Trump’s decision to pull the U.S. out of the Paris climate change agreement is the reaction it provoked from the “smartest guys in the room.”

Goldman Sachs CEO Lloyd Blankfein chose yesterday to mark his Twitter debut (a full six years after joining the social network) with a tweet slamming the decision, which he said would have bad consequences both for the planet and for the U.S.’s stature in the world.

Blankfein’s intervention contrasted sharply not only with the President’s own take but also with that of his former deputy Gary Cohn, who left Goldman to serve as Trump’s top economic advisor. Cohn, unsurprisingly, loyally defended his new boss’s position to Wolf Blitzer on CNN yesterday, but more than once gave the impression that he’s not really on the same page as the President when it comes to climate change.

Today’s decision is a setback for the environment and for the U.S.’s leadership position in the world. #ParisAgreement
– Lloyd Blankfein (@lloydblankfein) June 1, 2017

On the broadcast Cohn refused three times to answer whether Trump still believed that climate change was a hoax, as the President maintained during last year’s election campaign. Cohn suggested, not unreasonably, that that was a question for Trump himself, who had left the question open in his speech in the Rose Garden by choosing not to repeat the claim. And when Blitzer asked Cohn whether he personally agreed with the decision, Cohn chose not to answer with a clear “yes,” saying rather that he was “happy” to support the President’s broader economic agenda.

Cohn had been reported to have lobbied Trump to stay in the agreement, and had told reporters last week during Trump’s international visit that the economic arguments to trying to keep the coal industry alive – one of the reasons Trump regularly plays up – were weak.

“Coal doesn’t even make that much sense anymore as a feedstock” for the power industry, Cohn was quoted as saying.

Cohn tried to walk back those comments too, telling Blitzer, “I’m not sure that’s what I said” and saying that natural gas, which has displaced coal from the fuel mix in recent years thanks to the “unbelievable technological advancements” of the fracking industry, won’t always be as cheap as it is now.

“I believe all of these different feedstocks at some point will make an enormous amount of sense,” Cohn said. “I believe that we should have a very diversified environment in the United States where we support all forms of energy.”

And he didn’t like his former boss’s claim that the U.S. would lose its leadership position in the world.

“The United States is a leader, we’re a leader in technology what we’re doing in this country, in our new technological wave,” Cohn said. “We’re ahead of almost every other nation out there. Many other nations in the Paris agreement are still increasing their CO2 output,” while the U.S.’s carbon footprint has shrunk by 12.5% since 2006, he said—passing silently over the fact that most of that decline happened under Barack Obama’s leadership.