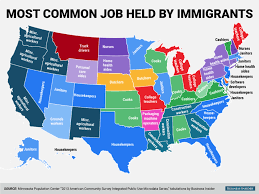 President Trump proclaimed Thursday that he has created “more than 1 million private sector jobs.”
Official government data from the Labor Department show only 493,000 private sector jobs have been added since January, when Trump took office. Trump is trying to take credit for double that amount.Trump was talking up his jobs record as he withdrew from the Paris climate agreement — a deal he described as a jobs-killer. Here’s the president’s exact quote on jobs:”Before we discuss the Paris Accord, I’d like to begin with an update on our tremendous, absolutely tremendous economic progress since Election Day on November 8th. The economy has started to come back and very, very rapidly. We’ve added $ 3.3 trillion in stock market value to our economy and more than a million private sector jobs.”

The latest government report on American jobs comes out Friday morning. It will show how many jobs the economy added in May. Trump gets an early look at the report, but it’s highly unlikely that it shows half a million more jobs. The U.S. economy has been adding around 180,000 jobs a month for the past year.

So where in the world does Trump get his 1 million figure?

How does Trump calculate 1 million jobs?

Notice that he implies he should get kudos for any job added since Election Day. The U.S. has added just over 1 million private sector jobs since October, but it is a huge stretch to take credit for jobs added while President Obama was still in office and his policies were in place.

Hiring under Trump is actually a tad slower than what the U.S. experienced under Obama early last year — long before it was clear Trump would win the election.

The other way Trump could possibly come up with 1 million jobs added is by looking at the ADP employment report. That report came out Thursday — the day of Trump’s speech — and it only measures private sector jobs.

Related: There is no coal jobs boom

The ADP report shows 1.2 million private sector jobs added since the start of the year. But there are two big catches.

First, the only way to get to Trump’s figure is to include jobs added in January. Trump was only president for 11 days in January. It’s unusual to give a new president credit for that month.

Second, ADP is just an estimate. It’s not the real data.

Related: Elon Musk to Trump: You quit Paris, so I quit you

ADP is a company that prints (or direct deposits) paychecks for about 24 million Americans. A few days before the official Labor Department jobs data comes out, ADP puts out an estimate of how many jobs were added or lost based on what ADP is seeing in the hiring and firing patterns of companies that it works with.

For years, economists and Wall Street investors have kept an eye on the ADP data, but they don’t consider it the official jobs data. The ADP report is often widely different from the government data. That’s because there are over 153 million Americans working today and ADP only gets a good look at the paychecks and employment of 24 million of them.