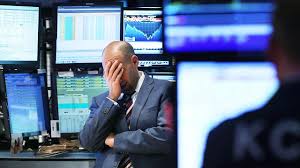 Wall Street led the so-called Trump Bump. And it also led the worst stock trading day of the year on Tuesday.

While banks stocks have risen the most dramatically since President Donald Trump’s election, the nine biggest Wall Street firms by market capitalization reversed that trend Tuesday. Together, the nine shed $ 81.6 billion in value, while the wider banking industry, as measured by the KBW bank index, also fell about 4% in Tuesday trading — making it the worst single day for banks since the Brexit vote in June.

That also helped send the S&P 500 down about 1.1%, and the Dow Jones industrial average down about 1.2% in Tuesday trading.

So why the sudden reversal in banks and the wider stock market?

For one, investors are increasingly beginning to think the stock market is overvalued, and perhaps their expectations of the Trump Administration’s more pro-growth policies — or at least its ability to implement those policies — might be a tad overblown. As stocks surged following Trump’s election, market watchers warned that the President’s proposed corporate tax cuts may take longer to appear than investors seemed to expect.

But what really rattled bank investors was likely flagging bond yields. Instead of shooting skyward after the Federal Reserve hiked interest rates last week, yields on the 10-year Treasury note fell — and have been steadily falling ever since. That’s because investors had expected the Fed to signal a more hawkish outlook, such as an announcement about further rate hikes next year. That would have been a boon for banks, which theoretically would earn more from lending funds to consumers. Unfortunately for bank investors, the Fed did no such thing. As a result, banks stocks, which have risen about 20% since Trump’s election, also slid that day last week.

The gradual sell-off in bank stocks Tuesday came as something of a surprise. Investors often look at the financial services firm Jefferies and its earnings as a bellwether for the performance of big banks in the same quarter because it reports its earnings earlier than other banks. On Tuesday, the firm announced first quarter earnings that beat expectations, thanks to strong performance from its bond trading unit. The bank posted a net income of $ 114 million, compared to its $ 167 million loss the same quarter the year before.

“There’s a reason why all these bank stocks are cratering. It’s because of the belief that none of the Trump programs will be put into effect,” Bove, the vice president of equity research at Rafferty Capital Markets, told CNBC. “There won’t be enough money in the government to allow for a tax cut and fiscal stimulus program if in effect the government can’t even pay the interest on the debt without borrowing the money.”