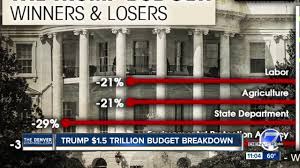 A Breakdown of Trump’s Budget: The Winners and Losers

President Donald Trump will propose beefing up military spending and slashing domestic programs and foreign aid in his fiscal year 2018 budget to be released on Thursday.

Here are the highlights:

The budget calls for an increase of $ 52 billion for the Defense Department above the 2017 base budget of about $ 522 billion, enacted under the Obama administration. There is an additional $ 2 billion increase in defense spending in other departments, including Energy and State.

That is still less than some of Trump’s fellow Republicans in Congress have called for, including the heads of the committees in the Senate and House of Representatives that oversee the U.S. military. But at a time of broad cuts elsewhere in the budget, the Pentagon is unlikely to complain.

The Department of Homeland Security would get a 6.8% increase, with more money for extra staff needed to catch, detain and deport illegal immigrants.

Trump wants Congress to shell out $ 1.5 billion for his promised border wall with Mexico in the current fiscal year—enough for pilot projects to determine the best way to build it—and a further $ 2.6 billion in fiscal 2018.

The combined budget for the State Department and U.S. Agency for International Development, or USAID, would fall by 28%, with funding cuts for the United Nations, climate change and cultural exchange programs. The plan preserves $ 3.1 billion in security aid to Israel.

The budget also requests $ 12 billion in so-called Overseas Contingency Operations, or OCO, funding for extraordinary costs, chiefly in war zones such as Afghanistan, Iraq and Syria. No comparison was provided for the current year’s OCO spending.

Current commitments on HIV/AIDS treatment under PEPFAR, the President’s Emergency Plan for AIDS Relief, will be maintained. PEPFAR is the world’s largest provider of AIDS-fighting medicine and enjoys bipartisan support.

The Environmental Protection Agency’s budget would be cut by 31%, eliminating its climate change programs and trimming back core initiatives aimed at protecting air and water quality.

Healthcare companies such as drug makers and device makers will pay more than twice as much in 2018 to have their medical products reviewed for approval by the Food and Drug Administration under the proposed budget.

The proposal budgets over $ 2 billion in fees to be collected from industry, twice as much in 2017.

Oversight of air traffic control would move from the federal government to an independent group under the proposals, which include a 13% cut for the Department of Transportation’s discretionary budget.

The budget for the Department of Energy would include $ 120 million to restart licensing for the proposed Yucca Mountain nuclear waste dump in Nevada, a project that has been stalled for years because of lawsuits and local opposition.

The Agriculture Department’s discretionary spending would be cut to $ 17.9 billion, a 21% drop from the temporary 2017 funding levels approved by Congress late last year.