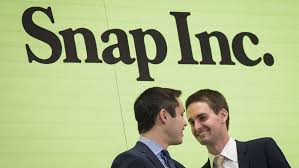 Here’s How Rich the Snap IPO Made Snapchat’s Founders

Snapchat CEO Evan Spiegel will be taking $ 1 a year home in the way of a salary.

But who needs cash when you own a hot new social media company?

After Snap’s IPO this week, the 26-year-old CEO and his co-founder Bobby Murphy were worth at least $ 5.2 billion apiece when the market closed Thursday, with Snap stock (snap) ending its first trading day at just under $ 24.50 per share.

That doesn’t include the value of some 16 million shares that each of the Snapchat founders planned to sell today. That would add $ 392 million to each of their net worths, based on Snap’s closing price, potentially boosting it to nearly $ 5.6 billion.

In a sense, Murphy and Spiegel are about $ 1.7 billion wealthier than they thought they would become. Snapchat’s IPO was officially priced at $ 17 per share. If Snap stock had hovered at that level after it began trading, Murphy and Spiegel would have achieved a net worth of “only” $ 3.9 billion each—even after selling the 16 million shares as intended.

Murphy and Spiegel’s total net worth, of course, could actually be much higher than the $ 5.6 billion estimate, as that does not account for houses, cars, or other valuables they may own. Plus, the Snapchat founders’ shares are likely worth significantly more than the Snap stock that was sold to the public. While all of Snap’s IPO shares were nonvoting Class A stock, Spiegel and Murphy also own millions of additional shares that allow them super-voting power and near-absolute control of the company.

Should there be a change of control at Snap, however unlikely, and Spiegel or Murphy sold some of their controlling stakes, their privileged shares (10-vote Class B and one-vote Class C stock) are likely to be valued at a 5% to 10% premium over the price of Snap’s nonvoting stock, according to Jay Ritter, a professor of finance at the University of Florida.

That range is the typical value differential between voting and non-voting shares, Ritter says.

Factoring in the voting premium on their shares, both Spiegel and Murphy’s net worth could be above $ 6 billion.

While Snap’s IPO boosted the net worth of other Snapchat executives, it pales in comparison to the founders’ newfound riches. Chief Strategy Officer Imran Kahn’s net worth grew to at least $ 69.5 million based on his 2.8 million shares in Snap. Timothy Sehn, Snap’s vice president of engineering, is now worth at least $ 165.3 million on his 6.7 million shares in the company. The soon-to-be-former CEO of Sony, Michael Lynton, saw his stake in Snap rise to $ 72 million. Lynton is also the chairman of the board at Snap.

Mitch Lasky, a general partner at Benchmark Capital Partners, is the next biggest owner of Snap after Spiegel and Murphy, with his stake valued at nearly $ 3 billion, while Snap’s earliest investor, Lightspeed Ventures, also owns a stake that is now valued above $ 1 billion.

And don’t worry too much about the $ 1 salary Spiegel is set to receive from now on. The CEO is still entitled to a $ 1 million bonus based on the company’s performance.