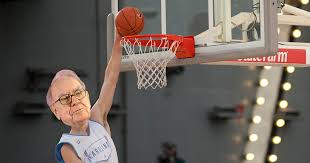 Right about now, Berkshire Hathaway employees are likely praying to gain Warren Buffett’s legendary talents as an Oracle—only over college basketball rather than the stock market.

The investing legend is offering $ 1 million a year to any Berkshire Hathaway employee who manages to correctly predict the Sweet 16 teams of the NCAA tournament in March, according to a Monday CNBC interview. Buffett first started the contest in 2014, and also held it last year.

Berkshire Hathaway employed about 367,700 people worldwide by the end of 2016. That figure includes those who work in Berkshire’s subsidiaries such as Kraft Heinz, Geico Auto Insurance, See’s Candies, and BNSF Railway. And those employees are in on the bet as well.

“If they can get to the Sweet 16, if there’s only one of them, whoever it is, he or she gets a million dollars a year for the rest of their life,” Warren Buffett said Monday on CNBC.

Last year, two employees tied for that prize, and received $ 50,000 each. Roughly 85,000 entered the contest last year, though Buffett is betting over 100,000 will participate this year.

Buffett has gone back to the hoop so many times on the million dollar basketball bet (he even once insured a $ 1 billion bet that no one in the world could predict the so-called Final Four of the college basketball championships), because the odds are well in his favor. Even all of the employees of Berkshire were to play, the odds that any one of them would win are not good. Past March Madness contest outcomes reveal that just 14 out of 11.6 million brackets filled on ESPN back in 2015 correctly predicted the entire Sweet 16. That’s less than 0.1% of the pool.

According to Mark Ablowitz, a professor of applied mathematics at the University of Colorado Boulder, there are 282 trillion possible Sweet 16 variations.

So if you were thinking of taking on a job at Dairy Queen just to compete in Buffett’s million dollar basketball bet, you probably should think again. Your chances of beating Buffett in the stock market likely have better odds.