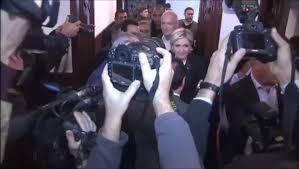 Marine Le Pen’s goal of taking France out of the Eurozone if she’s elected President would probably cost the country over 180 billion euros ($ 190 billion), according to a new study out Wednesday.

The pro-business think-tank Institut Montaigne reckoned that the hit to gross domestic product (the total value of a country’s goods and services output) would be on average 9% over the long-term—and warned that that forecast is optimistic, since it doesn’t factor in the broader dissolution of the Eurozone that would almost certainly follow if the currency union’s second-largest member pulled out.

The study bears an eerie resemblance to the prophecies of doom issued in the U.K. by the vast majority of economists in the run up to the Brexit referendum last year: it predicts a 20% drop in the exchange rate of the newly-reintroduced French franc and higher interest rates to contain resurgent inflation, and warns that “the number of jobs destroyed by this measure could be tens of thousands in the first year and could easily top 500,000 in the long term.”

Leaving the Eurozone is a central plank of Le Pen’s presidential campaign, alongside a promise of much tighter policy on immigration and internal security. She has led constantly in the opinion polls ahead of the first round of the two-round election due in April and May. However, all the polls have suggested that she would lose the second round run-off to either of her two likely opponents, the center-right Francois Fillon or the center-left Emmanuel Macron. Even if she does win, she would still need a majority in parliament after elections there in June to carry out her promises, and that seems even more unlikely than victory in the race for the presidency.

But the election is still widely seen as the most open in decades. A fresh terrorist outrage, in the style of the Nice or Paris attacks, could easily bolster her ratings. Moreover, both Fillon and Macron have vulnerabilities: Fillon is under investigation for misuse of public funds by employing his wife on a sinecure while he was a lawmaker, and Macron’s background at an elite university and the investment bank Rothschild leave him open to criticism that he is not the anti-establishment crusader he claims to be.

Financial markets are certainly taking no chances on the outcome. The risk premium on French government bonds, relative to the supposedly risk-free German equivalent, has skyrocketed on fears that those who hold euro-denominated bonds today could be repaid in francs tomorrow. And as the chart above shows, nothing gave that fear greater impetus than Donald Trump’s election in November, which, like Brexit, showed how much Europe’s establishment had underestimated the power of populist protest against the prevailing consensus.