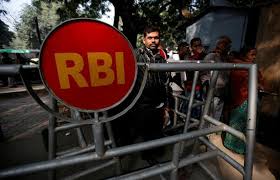 Acharya, in his first speech since taking up his post in January, said India had so far failed to tackle the banks’ bad debt problem through a piecemeal approach that had given “all discretion” to lenders.

Instead, India’s government and the RBI need more ambitious solutions to clean up more than $ 130 billion in soured loans held by the lenders, or risk repeating the economic stagnation suffered by Japan in the 1990s or the current financial troubles in Italy, Acharya told a gathering of bankers.

The speech marked the most detailed public remarks on banks given by an RBI official since the departure of Governor Raghuram Rajan last September. He had also strongly advocated cleaning up the bad debt held by Indian lenders to revive an economy suffering from a lack of private investments.

“I believe we are at a crossroads and have an important choice to make,” Acharya said.

“We simply don’t, as a society, have any excuse or moral liberty to let the banking sector wounds fester and result in amputation of healthier parts of the economy.”

Acharya later told reporters the RBI had not yet decided on specific measures for lenders or discussed the current proposals with government or bank officials.

Among the potential solutions suggested by Acharya were the creation of private asset management companies, or private equity type companies, that would raise private funds and help buy up and restructure the bad debt, forcing haircuts by banks and creditors if necessary.

Banks would first need to identify their 50 largest stressed exposures by Dec. 31, 2017 and the rest by mid-year 2018, Acharya proposed.

Under a second model proposed by Acharya, India’s government could create a national asset management company, or a “quasi-government” entity, in charge of buying up and restructuring debt in debt-laden sectors such as power.

This entity could hold bad assets, raise debt to pay off banks, although with haircuts, and bring in private managers to turn around the assets, Acharya suggested.

The deputy governor did not give specific financial projections on how much either model could restructure or raise.

Acharya also said the government would need to inject more funds into state-run lenders, though he did not provide an estimated amount, adding that it would have to attach strict performance conditions.

“Time is of the essence if we are to restore corporate investment and job creation,” he said.