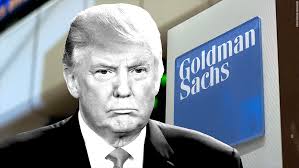 Shares of the investment banking giant reached an all-time high early Tuesday, it’s first since before the financial crisis. Goldman’s shares were up again on Wednesday.

It seems that markets are increasingly convinced that Donald Trump’s presidency will usher in higher interest rate, lower corporate taxes, more dealmaking, and a lighter regulatory burden. Apparently, Fed Chairwoman Janet Yellen’s recent defense of the Dodd Frank act before the Senate Banking Committee did nothing to deter investors from Wall Street. And remember, one Trump’s top economic advisors, Gary Cohn, was once heir apparent to be the next CEO of Goldman.

In fact, it appears that a good portion of the Trump Rally that has pushed the Dow Jones industrial average above 20,000 for the first time hinges on the belief that Wall Street regulations, namely Dodd-Frank, will be swept away. Goldman Sachs has been responsible for nearly 21% of the index’s rise since the election. That is in part because the bank’s stock is the most expensive on the benchmark (the Dow is a price-weighted index), but also because investors seem to think Goldman could be one of the biggest benefactors of the financial regulatory rollback.

Not every Wall Street bank has been dragged out of the depths of the recession—even if the financial services industry as a whole has outperformed the wider market. Bank of America for one is still down 55% from its pre-recession high in 2006.

Furthermore, investors who decided to buy and hold Goldman Sachs at its height in 2007 aren’t exactly making a killing. As of Wednesday, shares have eked out a measly 1.5% return since it previous high—not that Warren Buffett is worrying.