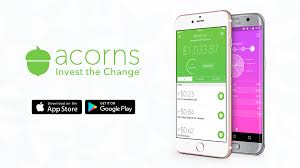 The fintech app Acorns may be backed by high-net-worth investors including billionaire trader Steve Cohen, but its customers are far more average: Regular investors who make as little as $ 25,000 per year.

Acorns is part of a trendy and growing industry of so-called robo-advisors, online-only financial advisors that steer clients’ money into low-cost investments. Yet while many financial advisors recommend skipping your morning latte and other inessential indulgences in order to save more for retirement, Acorns actually encourages you to keep swiping your credit card in pursuit of that same goal.

Here’s how it works. Acorns connects with any credit or debit cards you choose as well as your bank account. If you charge a coffee at Starbucks (sbux) for, say, $ 2.67, Acorns rounds up to the nearest dollar, withdraws the 33-cent difference from your bank account and invests the money in your portfolio. If you bought the Beyoncé single “Formation” on Apple (aapl) iTunes for $ 1.29, Acorns would round up to $ 2 and invest another 71 cents from your bank account. And if you ordered the artificially intelligent Amazon (amzn) Echo for $ 179.99, you would end up investing an extra penny via Acorns.

And so on. And when it’s not possible to round up, Acorn will just withdraw and invest a whole extra dollar. That’s what would happen if you left a tip at a restaurant that brought your total bill to exactly $ 100.

Though investing only your “spare change,” as Acorns calls it, may seem like an impossibly slow way to grow a nest egg, the company is betting on a little financial psychology: People have a much easier time ponying up a little bit of money on a regular basis than they do plunking down larger sums on a less frequent schedule.

That helps explain Acorns’ fast growth and popularity: After launching less than two-and-a-half years ago, Acorns already has 1.5 million customers who have invested $ 310 million. Compare that to leading robo-advisor Betterment, which manages more than $ 7 billion, but for only 210,000 clients. (Acorns customers can also choose to make one-off or recurring investments of larger amounts than just their spare change.)

“We also recognize that changing behavior is really difficult,” says Acorns CEO Noah Kerner, a serial entrepreneur who as a teenager worked as a DJ for pop star Jennifer Lopez. “For us, it would be great if you decided to skip your cup of coffee and put the $ 3 into Acorns every time, but we’re not expecting that to happen necessarily….So you can enjoy the little luxury and do the things you would normally do, but we’re going to be woven into the fabric of what you’re doing.”

Requiring a minimum investment of only $ 5, Acorns’ target market is the 75% of Americans who make less than $ 100,000 per year, Kerner says. But the company is hoping to give those investors a boost through a sort of mathematical illusion: A recent survey of its customers found that given the option, the lion’s share of them thought it would be easier to set aside $ 5 per day than $ 100 per month, even though the former actually takes a lot more money (about $ 150 per month).

Indeed, if an 18-year-old started putting away just $ 5 per day, by the time they reached retirement age at 65, they’d “have almost $ 1 million set aside through Acorns,” Kerner says (assuming a compound annual return of 8%). “Which is powerful.”

Acorns’ business model applies the same principle: Rather than charging a percentage of assets as other robo-advisors and money managers do, it asks for a $ 1 monthly fee. (After you surpass $ 5,000 in your investment account, Acorns’ monthly cost amounts to 0.25% of assets, the same as Betterment. Below that breakpoint, the $ 1 monthly fee actually makes Acorns the more expensive option.)

As for where clients’ “spare change” actually goes, Acorns invests it in one of five portfolio options, designed with different levels of risk by Nobel Prize-winning economist Harry Markowitz.

In addition to credit and debit cards, Acorns also works with electronic purchasing methods, including PayPal (pypl) (which is an investor in the company) and Apple Pay, which is tied to the user’s credit card anyway. Last year, Acorns raised $ 30 million in funding from PayPal and Cohen’s Point72 Ventures, bringing its total funding to $ 62 million.