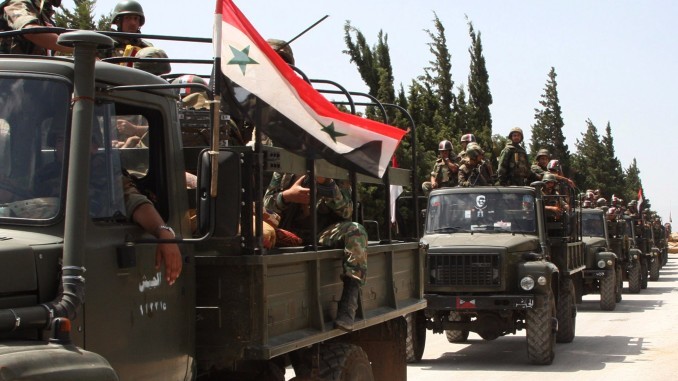 Syrian army announces victory in Aleppo in boost for Assad

BEIRUT : The Syrian army said it had retaken complete control of Aleppo on Thursday after the last rebel fighters were evacuated from the city, handing President Bashar al-Assad his biggest victory of the war. The military said it had brought “the return of safety and security to the city of Aleppo”, ending four years of rebel resistance in the northern Syrian city.

The recapture of Aleppo is Assad’s most important gain so far in a nearly six-year-old war that has claimed the lives of 300,000, but the fighting is not over with large parts of the country still controlled by insurgent and Islamist groups.

The last group of rebels and their families holed up in a small eastern enclave of Aleppo were evacuated under a deal that gives the army and its allies full control of the city, Syrian state television said.  At least 34,000 people, both civilians and fighters, have been evacuated from east Aleppo in a week-long operation hampered by severe winter weather, according to the United Nations, which estimates that thousands more remain behind.

“The process for evacuation was traumatic, with crowding, and vulnerable people waiting for hours and exposed to sub-zero temperatures,” U.N. spokesman Farhan Haq told reporters in New York. Remaining civilians must be allowed to leave safely if they choose to do so, he said.

The last evacuees left a tiny pocket that was all that remained of a rebel sector that covered nearly half the city before being besieged in the summer and hit by intense air strikes that reduced much of it to rubble. As the months of bombardment wore on, rescue and health services collapsed and casualties mounted.

The final phase of the evacuation ended when a convoy carrying nearly 150 people, including fighters and members of their families, departed towards rebel-held areas outside the city, state television said. State media showed a convoy crossing from the Ramousah highway junction in south Aleppo to al-Rashideen in the countryside just southwest of the city.

“A short while ago, the last group from Aleppo arrived in the western countryside,” said a spokesman for the Ahrar al-Sham rebel group.

In parallel, two buses carrying people from the pro-government villages of al-Foua and Kefraya, besieged by rebels in Idlib province, arrived in government-held Aleppo. A total of 900 people were transferred from the villages to government-held parts of Aleppo during the week-long evacuation process, according to the Syrian Observatory for Human Rights, a group that monitors the war.

Government forces had insisted the two villages must be included in the deal to bring people out of Aleppo. Under a deal brokered by Turkey and Russia, convoys of buses and cars have shuttled thousands of civilians and fighters out of Aleppo’s last rebel-held pocket towards opposition areas outside the city since late last week.

“It’s done. The evacuation process has ended and the last bus has come out,” said Ahmad al-Dbis, a medical aid worker heading a team evacuating patients from Aleppo.

In the western part of the city, controlled by the government throughout the war, there was celebratory gunfire, fireworks, and street parties on Thursday night, witnesses told Reuters. Crowds sang, danced and waved flags and pictures of Assad, chanting slogans praising the army and the president.

A senior United Nations official warned earlier that those evacuated from Aleppo after the crushing government offensive could suffer the same fate in their new place of refuge.

“Many of them have gone to Idlib, which could be in theory the next Aleppo,” U.N. Special Envoy Staffan de Mistura said in Geneva. He said a cessation of hostilities across Syria was vital if another battle like the bloody struggle for Aleppo was to be avoided.

The arrival of thousands of refugees from Aleppo in Idlib aroused fears that the rebel-held city in northwestern Syria could be next. Assad has declared that the war is far from over and that his armed forces would march on other rebel areas.

Assad said earlier that retaking Aleppo was a victory shared with his Russian and Iranian allies. In comments after meeting a senior Iranian delegation, Assad said his battlefield successes were a “basic step on the road to ending terrorism in the whole of Syria and creating the right circumstances for a solution to end the war”.

Russia’s air force conducted hundreds of raids that pulverised rebel-held parts of Aleppo while Iranian-backed militias, led by the Lebanese group Hezbollah, poured thousands of fighters into the city. Defence Minister Sergei Shoigu said Russian air strikes in Syria had killed 35,000 rebel fighters and halted a chain of revolutions in the Middle East. The last fighters and civilians were evacuated overnight and on Thursday from east Aleppo to opposition-held areas.

“Most are heading towards camps, or to their relatives, or shelter locations,” said Dbis, the aid worker. “The humanitarian situation in northern Syria is very difficult, because the area is already densely populated since it has people displaced from all over Syria.”

Those leaving Aleppo were not only going to Idlib, a city and province southwest of Aleppo, but to villages in the countryside in Aleppo province that lies west and north of the city and has also been heavily bombed. A rebel official said a heavy snow storm that hit northern Syria and the sheer numbers involved had delayed the evacuation.