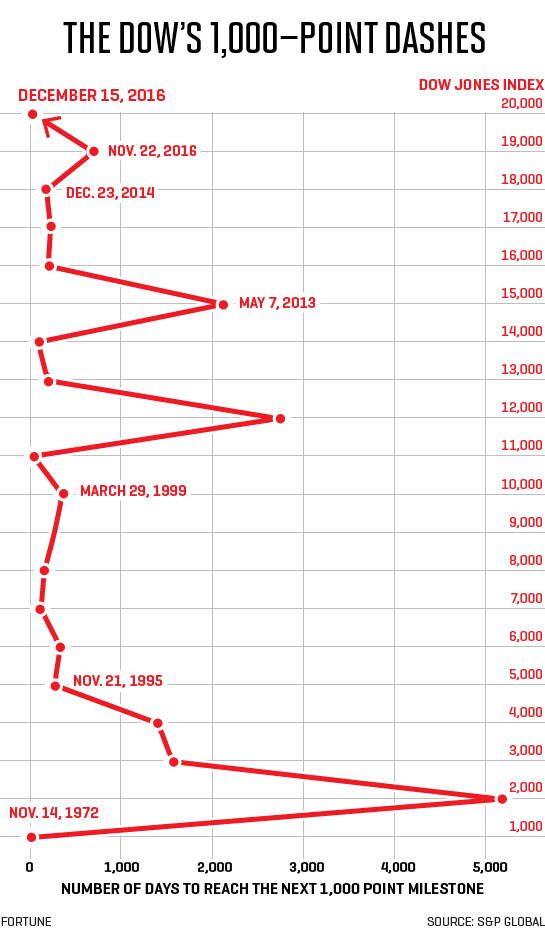 If the stock market seemed like it was zooming along during the dot-com boom of 1999—later to become known as a bubble—just try keeping up with it in 2016.

The Dow Jones industrial average, already trading at record highs, came within 60 points of breaking 20,000 on Thursday, a milestone that would be unprecedented in more ways than one.

After all, the Dow just surpassed 19,000 for the first time less than a month ago—two days before Thanksgiving. That was only 23 days ago, or 16 trading days (15.5 if you account for the stock market’s early close on Black Friday).

Hitting 20,000 would not only mark a new record level for the Dow, which has been setting new records almost every trading day since Donald Trump won the election, it would also break a much rarer record for speed. The last time the Dow Jones industrial average rose 1,000 points so quickly was in May 1999, in the middle of dot-com hysteria. And that time it took 35 days for the Dow to go from 10,000 to 11,000, according to S&P Global.

There’s a mathematical reason for the Dow’s acceleration: The higher the index goes, the less it has to rise in percentage terms to surpass the next milestone. Think of it like a snowball rolling down a hill. As the snowball picks up more snow with each rotation, getting larger and larger, it rolls even faster.

Before investors start cheering the 20,000-point finish line, though, there is something to remember: The Dow doesn’t always go up. Sometimes it falls down, way down, and it takes a very, very long time to return to its peak level again.

So if and when the Dow hits 20,000 in record time, just remember this: We may have to endure another stock market crash before it takes its next big step up.