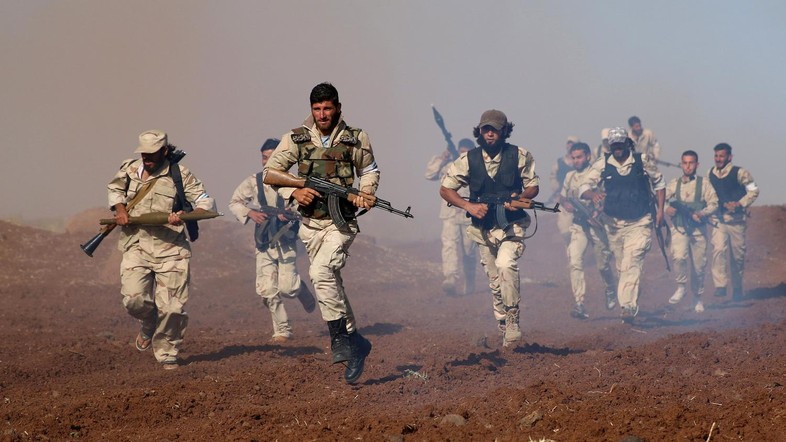 BEIRUT : Rebels in Aleppo have told the United States they will not leave their besieged enclave in the city after Moscow called for talks with Washington over their withdrawal, signalling they will fight on even as their top commander was wounded.

A Syrian military source said the army aimed to take full control of Aleppo within weeks, after seizing swathes of the city’s rebel-held east in an advance poised to deal a major blow to the rebellion against President Bashar al-Assad.

With more than 30,000 people uprooted by the latest fighting, residents who fled eastern Aleppo for government-held areas early in the war began returning to the Hanano district recently captured from the rebels to inspect their homes.

Under relentless attack, the rebels may eventually have no choice but to negotiate a withdrawal from their shrinking, besieged enclave in eastern Aleppo, where tens of thousands of civilians are thought to be sheltering.

The Western and regional states that have backed the rebellion appear unwilling or unable to do anything to prevent a major defeat for the opposition fighting to topple Assad, who has benefitted from direct Russian and Iranian military support.

The U.N. Security Council is due to vote on Monday on a draft resolution that would demand an initial seven-day truce in Aleppo, which could then be renewed. But it was unclear if veto-power Moscow would block the resolution.

Restoring full control over Aleppo would mark the biggest triumph yet for Assad in a war that spiralled from protests against his rule in 2011. The campaign waged by the Syrian army and its allies in Aleppo is one of the most ferocious of the war, with hundreds reported killed in recent weeks alone.

Russia, whose air force has helped the government close in on eastern Aleppo this year, said on Saturday it was ready for talks with the United States over a full withdrawal of rebels from Aleppo.

Speaking to Reuters from Turkey, senior rebel official Zakaria Malahifji said groups fighting in Aleppo told U.S. officials on Saturday they would not leave the city.

“Our response to the Americans was as follows: ‘we cannot leave our city, our homes, to the mercenary militias that the regime has mobilised in Aleppo’,” said Malahifji, the head of the political office of an Aleppo rebel group.

“They listened to the response and did not comment,” he said, adding the rebel groups had reiterated calls for humanitarian corridors to be opened for the delivery of food and medicine into eastern Aleppo and the evacuation of the wounded.

The United States has yet to comment on the proposal made by Russian Foreign Minister Sergei Lavrov on Saturday for talks on the withdrawal of all rebel fighters “without exclusion” from Aleppo.

The rebels said the Russians had retreated from proposals agreed at talks with rebel groups in Turkey that would have resulted in jihadist fighters leaving the city, a ceasefire and humanitarian aid deliveries.

The Syrian army, backed on the ground by an array of militias including Shi’ite groups from Iraq, Iran and Lebanon, has vowed to crush the rebels in Aleppo.

“The expectation is weeks,” the military source said, referring to the timeframe for taking back the whole city.

“The Syrian Arab Army will continue to implement its missions until the elimination of the terrorists and the recovery of control over all the eastern districts,” he said.

Pro-Damascus sources have previously said the army aimed to take back all of Aleppo by the time U.S. President-elect Donald Trump takes office on Jan. 20. The reason was to mitigate the risk of a shift in U.S. policy on Syria, though Trump has indicated he could end U.S. support for the rebels.

The United Nations estimates that close to 30,000 people have been displaced by the latest fighting, 18,000 of them leaving to government-held areas, a further 8,500 going to the Kurdish-controlled neighbourhood of Sheikh Maqsoud and the rest moving within rebel-held areas.

U.N. envoy Staffan de Mistura has said more than 100,000 people may still be in the rebel-held area. The Syrian Observatory for Human Rights, a Britain-based group that reports on the war, said it could be as many as 200,000 people.

Food and fuel supplies are critically low in eastern Aleppo, where hospitals have been repeatedly bombed out of operation.

The rebels, including foreign-backed groups, say they have been abandoned to their fate in a war against better armed enemies including the Russian air force and Lebanon’s highly trained Hezbollah.

In another blow to the rebels, the head of a new rebel alliance was seriously wounded on Saturday, rebel officials said. Abu Abdelrahman Nour will be replaced as head of the “Aleppo army” he was appointed to lead last week.

The army and its allies have opened numerous fronts against the rebel-held east in what rebels see as an effort to deplete their ammunition and men. Malahifji said the rebels could remain steadfast for “an excellent period” of time.

The Syrian Observatory for Human Rights said the army or its allies were attacking in at least eight places. It says rebels have lost more than 60 percent of the area they held until recently. Rebels say the amount captured is less.

Observatory Director Rami Abdulrahman said the pro-government forces were seeking to drive another wedge into the rebel-held sector from Aleppo’s ancient citadel southwards.

The government took journalists to the recently captured Hanano district of northeastern Aleppo on Sunday, using a road through the city centre that was reopened two days ago.

A Reuters journalist said buses leaving from western Aleppo were bringing a steady stream of people to inspect homes they had not seen in years. Russian military trucks also delivered aid to the captured eastern districts of eastern Aleppo.