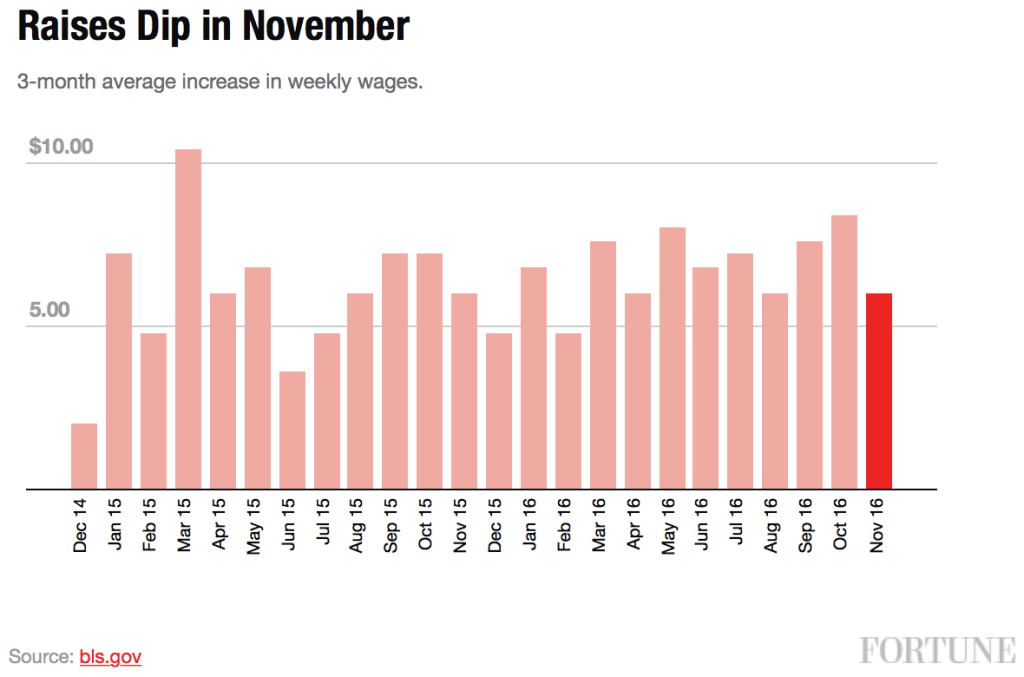 For Donald Trump, it’s better to be lucky than good.

The President-elect can hardly be credited for the labor market’s strong showing in November, but he’ll surely benefit from the economy’s momentum as he prepares to take office.

The Labor Department announced Friday that the labor market added 178,000 jobs in November, and that the unemployment rate fell from 4.9% to 4.6%, bolstering the conventional wisdom that the Federal Reserve will raise interest rates later this month. “The solid November jobs report is the last piece for a Federal Open Market Committee increase of 0.25 percentage point in the federal funds rate on December 14,” writes Gus Faucher, Deputy Chief Economist with PNC Financial Services Group in a research note. “The economy is close to full employment, and the FOMC wants to start gradually raising interest rates before the economy reaches full employment.”

Contained in the generally good report for the economy was one whopper of a womp womp for workers. Hourly pay fell in November by 3¢ to $ 25.89. That followed a huge increase, relatively, a bump of 11¢, in October, which had caused some to say the prolonged draught in raises had finally come to an end. But apparently, the so-called raise-less recovery is still alive and well. As University of Michigan Economist Justin Wolfers put it Friday morning on Twitter:

The more striking part of the payrolls report is that hourly earnings fell slightly this month, and are up only 2.5% over the year.

The really great news in this job report is that the economy seems able to sustain sub-5 percent unemployment without generating inflation.

This could be welcome news for Trump and his emerging economic agenda come January. The conventional wisdom had been that the current economy wouldn’t necessarily be congenial to Trump’s promises of tax cuts and spending on infrastructure. Some have argued that those promises would cause massive inflation at a time when the economy has already reached full employment.

But if, as Wolfers argues, the economy can avoid the sort of inflation pressures that today’s low unemployment rate would normally impose, that could mean that it can also accommodate the President-elect’s promised growth policies without pushing up prices dramatically and forcing the Fed to raise interest rates too quickly.