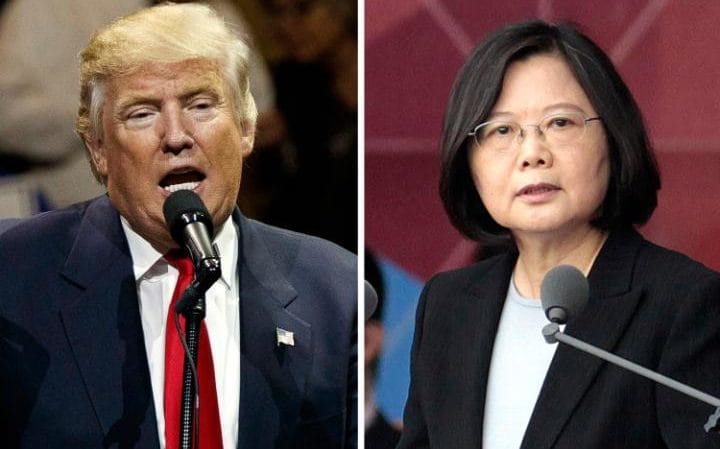 WASHINGTON/BEIJING : U.S. President-elect Donald Trump spoke by phone with President Tsai Ing-wen of Taiwan, but China, which considers the self-ruled island its own, said it was confident Washington’s “one China” policy would not change.

The 10-minute telephone call was the first such contact with Taiwan by a U.S. president-elect or president since President Jimmy Carter switched diplomatic recognition from Taiwan to China in 1979, acknowledging Taiwan as part of “one China”.

“This is just the Taiwan side engaging in a petty action, and cannot change the one China structure already formed by the international community,” Wang said at an academic forum, Hong Kong-based Phoenix TV reported.

“I believe that it won’t change the longstanding ‘one China’ policy of the United States government.”

Trump said on Twitter that Tsai had initiated the call. “The President of Taiwan CALLED ME today to wish me congratulations on winning the Presidency. Thank you!” he said.

Alex Huang, a spokesman for Tsai, said: “Of course both sides agreed ahead of time before making contact.”

Photographs released by Taiwan’s presidential office showed Tsai, her national security council chief and her foreign minister participating in the call with Trump.

China considers Taiwan a wayward province and has never renounced the use of force to bring it under its control. Defeated Nationalist forces fled there at the end of a civil war with the Communists in 1949.

Chinese President Xi Jinping met Taiwan’s then-President Ma Ying-jeou last year but relations between the two sides have worsened since the election of Tsai as president in January.

“Interesting how the U.S. sells Taiwan billions of dollars of military equipment but I should not accept a congratulatory call,” Trump said in another tweet.

Trump has eschewed tradition in other calls with foreign leaders since he won the U.S. election, prompting the White House to encourage him to make use of the diplomatic expertise and counsel of the State Department.The White House responded to the call by saying that “longstanding policy” on China and Taiwan had not changed.

“We remain firmly committed to our ‘one China’ policy,” said Ned Price, a national security spokesman for President Barack Obama. “Our fundamental interest is in peaceful and stable cross-Strait relations.”

Trump adviser Kellyanne Conway said on CNN that Trump was “well aware of what U.S. policy has been” on Taiwan.

Administration officials said Trump’s team did not alert the White House about the call ahead of time.

Randy Schriver, a former deputy assistant secretary of state responsible for East Asia, including Taiwan, under former President George W. Bush said he believed the call was “primarily a courtesy”.

“China should have no objection … They know better than anyone that contact between leaders does not violate a U.S. one China Policy,” he said.

However, Gerrit van der Wees, a former Dutch diplomat who lobbies on behalf of Taiwan, said the call indicated Trump would be less bound by conventions and restrictions in foreign policy and was “signalling a broader change in U.S. policy towards Taiwan”.

Advisers to the Republican president-elect have indicated that he is likely to take a more robust policy toward China than Obama, a Democrat, and that Trump plans to boost the U.S. military in part in response to China’s increasing power in Asia. However, details of his plans remain scant.

Trump lambasted China throughout the U.S. election campaign, drumming up headlines with pledges to slap 45 percent tariffs on imported Chinese goods and label the country a currency manipulator on his first day in office.

Senator Chris Murphy, a member of the Senate Foreign Relations Committee, said Trump was entitled to change policy, but his approach was potentially dangerous.

“Foreign policy consistency is a means, not an end. It’s not sacred. Thus, it’s Trump’s right to shift policy, alliances, strategy,” Murphy, a Democrat, said in a note on Twitter.

But he added: “What has happened in the last 48 hours is not a shift. These are major pivots in foreign policy w/out any plan. That’s how wars start.”

Earlier this week, Trump spoke to Pakistani Prime Minister Nawaz Sharif and praised him, according to the Pakistani leader’s office, as a “terrific guy”.

Islamabad and Washington have seen relations sour in recent years over U.S. accusations that Pakistan shelters Islamist militants who kill U.S. soldiers in Afghanistan, a charge denied by the South Asian nation.

Trump also invited Philippine leader Rodrigo Duterte to the White House next year during what a Duterte aide said was a “very engaging, animated” phone conversation. Duterte has openly insulted Obama, who cancelled a planned meeting with him in September.

A statement issued by Trump’s transition team made no mention of the invitation.