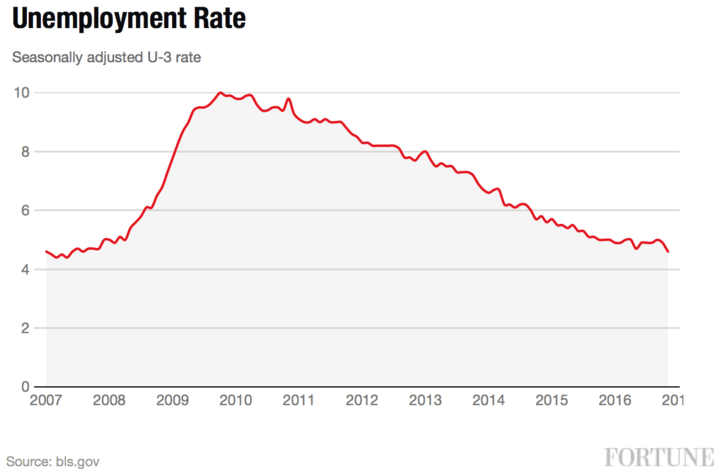 Donald Trump’s presidential victory may have caused some employers to hit the pause button, but not many.

In the first jobs report since Trump was elected president, employers added slightly fewer positions than expected in November. Nonetheless, the unemployment rate dropped unexpectedly to 4.6%. That’s the lowest rate that economic measure has been since August 2007, and is near what the Federal Reserve calls full employment. While that is certainly good news, the low jobless number will certainly cause some to think that economic gains are likely to slow from here, and inflation may rise.

But that hasn’t happened yet. Last month, employers added a still solid 178,000 jobs to their payrolls. That was slightly less than the 180,000 jobs employers were expect to add in November. Still the unemployment rate fell to 4.6%. At the same time, signs of rising inflation took a breather in November. Wages fell slightly in November. That was after pay rose at the fastest pace since the end of the recession in October.

The November jobs report is another sign the economy continues to extend its slow expansion, seven years after the recession officially ended. It also showed that uncertainty that some predicted would grip the economy if Trump was elected, really didn’t happen, or at least hasn’t happened yet. The good jobs report will continue to be wind at Trump’s back as he comes into office and tries to deliver on his promise of returning manufacturing jobs to America.Friday’s jobs number is also unlikely to sway the Federal Reserve, which is expected to raise interest rates later this month, from pushing ahead. While jobs number showed no sign of inflation, it also showed that the economy is pushing forward, and can likely tolerate higher interest rates. The benchmark Fed rate has been stuck near zero since the beginning of the Great Recession, and many have argued that it is time to end the Fed’s historically low interest rates policy. November’s jobs report will give them more ammo for that.