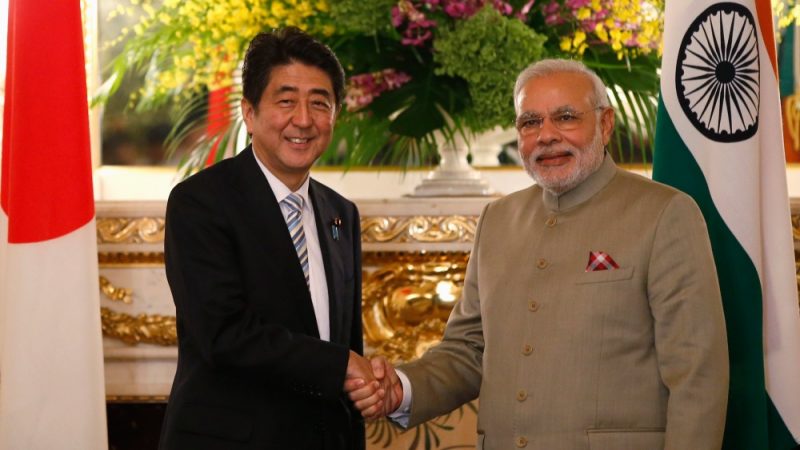 India, Japan and the United States have been building security ties and holding three-way naval exercises, but Trump’s “America First” campaign promise has stirred concern about a reduced U.S. engagement in the region.

Such an approach by Washington could draw Modi and his Japanese counterpart Shinzo Abe even closer, said foreign policy commentator and former Indian ambassador M.K. Bhadrakumar.

Officials in New Delhi and Tokyo said a deal that will allow Japan to supply nuclear reactors, fuel and technology is ready for signing after six years of negotiations to find a way around Tokyo’s reservations about such an agreement with a country that has not signed the nuclear Non-Proliferation Treaty (NPT).

India says the NPT is discriminatory and it has concerns about nuclear-armed China as well as its long-time rival Pakistan.

Japan, the only country to have suffered a nuclear attack, has been seeking assurances from New Delhi that it would not conduct nuclear tests any more.

Indian foreign ministry spokesman Vikas Swarup said the two sides had reached a broad agreement on nuclear collaboration as early as last December and had since been trying to finalise the document.

A “legal, technical scrub” of the agreed text has now been done, he said, but added that he could not pre-judge the outcome of Modi’s summit talks with Abe over Friday and Saturday.

The nuclear agreement with Japan follows a similar one with the United States in 2008 which gave India access to nuclear technology after decades of isolation.

That step was seen as the first big move to build India into a regional counterweight to China.

India hopes to lift ties with the United States to a new height, Modi said in a message to U.S. President-elect Donald Trump on Tuesday.

A final deal with Japan could also benefit U.S. firms.

India is in advanced negotiations with U.S.-based Westinghouse Electric, owned by Japan’s Toshiba, to build six nuclear reactors in southern India, part of New Delhi’s plan to ramp up nuclear capacity more than ten times by 2032.

But the agreement will still have to be ratified by the Japanese parliament, she said.

Japan’s Yomiuri newspaper said the main accord will likely be accompanied by a separate document stipulating that Tokyo will suspend nuclear cooperation if India conducts a nuclear test. Initially, Japan wanted that inserted into the agreement itself, but India resisted, it said.

India has declared a moratorium on such testing since its last explosions in 1998.

The two countries have also been trying to close a deal on the supply of amphibious rescue aircraft US-2 to the Indian navy, which would be one of Japan’s first sales of military equipment since Abe lifted a 50-year ban on arms exports.

India’s Defence Acquisitions Council met earlier this week to consider the purchase of 12 of the planes made by ShinMaywa Industries, but failed to reach a decision.

An Indian government source said opinion within the military was divided over whether to buy the aircraft when it was struggling to find resources to replace ageing and accident-prone submarines and address a shortage of helicopters.

A Japanese defence source said Japan was considering a cost reduction, which would mean a price cut for India as well as for the Japanese navy which it supplies. A US-2 currently costs about 13 billion yen ($ 123 million).