5 reasons to be worried about US Stock Markets

The NYSE and NASDAQ stock markets have been on a historic bull run since 2009. The NYSE has bounced back to just under 11,000 from a low of 4,716 during the Financial Crisis. The other major indices have put in similar performances.There was a 10% or so correction early this year, but US stock markets rebounded strongly.

It’s rare for stocks not to see a major market correction in more than eight years. Many analysts also argue that macroeconomic fundamentals aren’t strong enough to support stock valuations… even if the US is performing better than Europe and other global economies.

The stock markets, though, have ignored these analysts and have moved up steadily. Nothing lasts forever. It seems more and more likely that stock markets will begin a correction phase soon. The presidential election is coming up. Historically, this event has been a catalyst for major market moves.

With a bear bias in mind, let’s look at five worries about US stock markets.

With the Dow topping 18,500, the S&P 500 pushing close to 2200, and the NASDAQ breaking through 5200, US stock markets keep flirting with all-time highs. Some technicians might argue this is a good sign, as the markets are basing for an upside breakout. 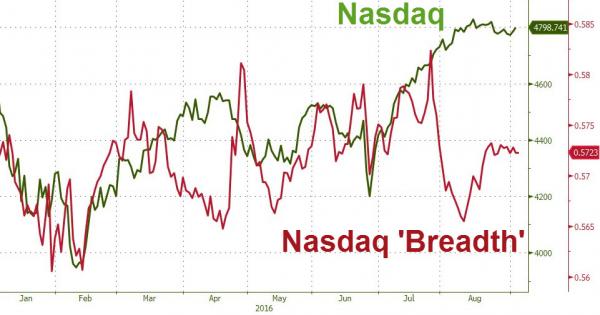 But, the fact that the market still can’t break through the new record highs set last summer can also be seen as a worrisome sign of trouble ahead.

About a year ago, many economists were rightly excited about the “shoots of growth” in the US economy. Economic growth was chugging along at a 3%+ annual rate, and the Fed was starting to increase interest rates.

Then the economic numbers started to slump. By the first quarter of 2016, economic growth had slipped to an annual rate of 1.6%. By July 2016, the growth rate was 1.2%. That doesn’t sound like the kind of growth that sustains new record highs in financial markets.

The economic malaise of most European nations doesn’t seem to be getting better. Economic growth in the EU area has been stuck at around .5% GDP growth for more than five years. The latest reading in July 2016 was a disappointing annualized GDP growth rate of .3%. 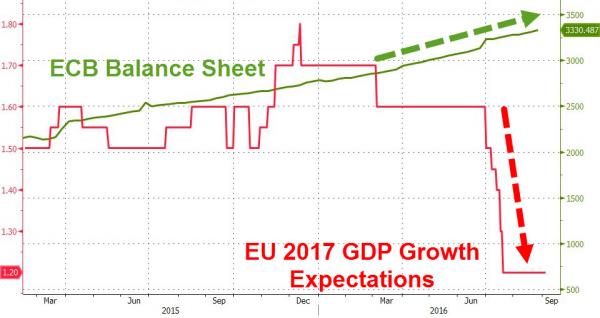 Note that this anemic growth comes despite several years of fiscal and monetary stimulus. It’s hard for US companies to move full steam ahead when their largest trading partner can’t break out of the economic doldrums.

Throw the Brexit vote by UK residents into the mix, and you’ve got a recipe for market uncertainty over the next several quarters.

EM markets on a tear; poised for a correction 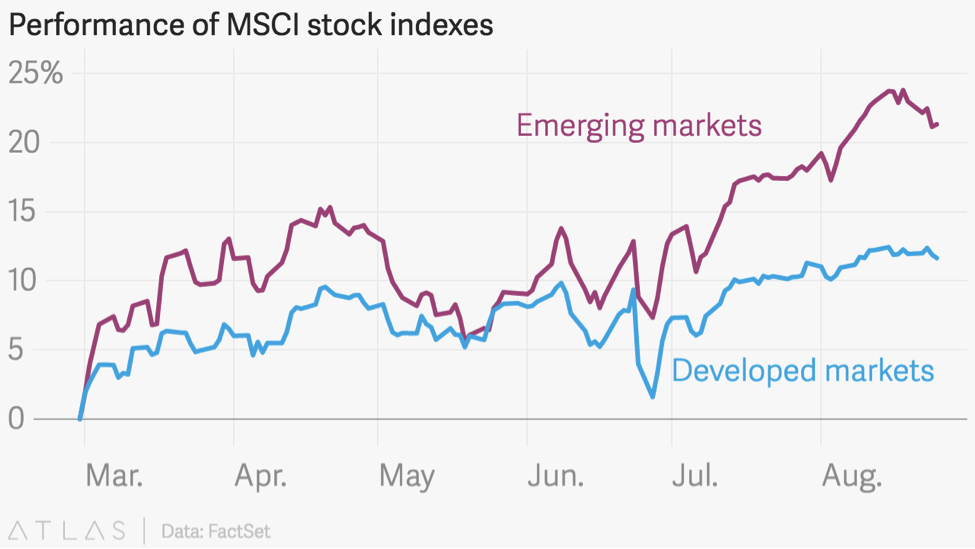 Stock markets in emerging economies have been on a tear for the last couple of quarters. Broad emerging market indices are up 20%+ over the last six months. Major EM stock indices had moved up for seven consecutive weeks until the week ending August 26.

A number of well-regarded economic pundits and investment gurus, including Jared Dillian, have just recently called for a reversal (or at least a breather) in emerging markets. They argue that the Fed may adopt a more hawkish stance in upcoming economic speeches. They say taking profits off the table now (after a big runup) will give you dry powder when the inevitable correction does come.

US earnings are slipping 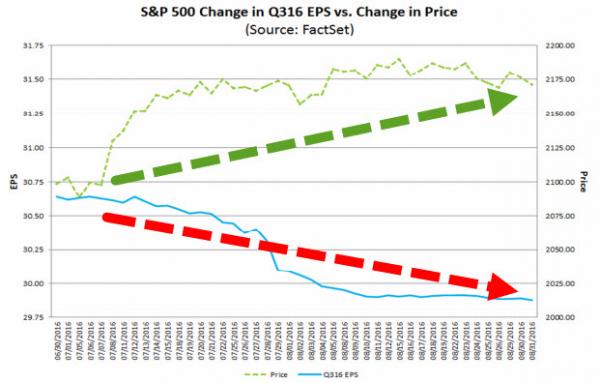 The Goldman Sachs US Equity team argues that the performance of the energy sector will continue to be a drag on US corporate earnings throughout 2016 and into 2017.

Timing the markets is, of course, the greatest challenge for an investor. If you want to be ready to protect your portfolio when a major market downturn comes, take a closer look at these top five concerns about US stock markets.