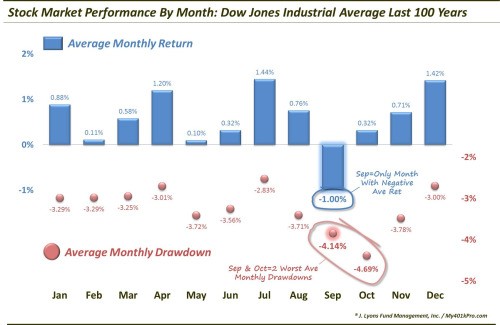 Is September really so bad for stocks?

September has historically gotten a bad rap in the stock market; has it really been that bad?
Most investors are probably somewhat aware, either through education or experience, of the dubious reputation of the forthcoming seasonal period in the stock market. Specifically, the months of September and October are arguably the 2 rockiest months for stocks, historically. But is the reputation deserved? Is it based on statistical evidence, or merely bad anecdotal memories. We took a look at the numbers.

October gets an especially bad rap and, based on its history, it is deserved…somewhat.
Over the past 100 years, the Dow Jones Industrial Average has experienced an average drawdown (i.e., maximum intra-month loss) of -4.69%. That is far and away the worst of any month. Just one other month even comes within 90 basis points of that drawdown. However, October has also shown great propensity to bounce back from such losses. Its average return of 0.32% is tied for 9th best and its median return of 0.97% is actually the 6th best of any month, or in the upper half.

September has been relatively weak for stocks all around, with no redeeming qualities.
September’s average drawdown of -4.14% is the only one close to that of October. However, it has not shown the propensity to rebound like October has. Over the past 100 years, September is the only month showing an average loss for the Dow. Furthermore, its average loss is a full -1.00%.

At -1.00%, September’s average return is at a discount so large versus the other months that simple “coincidence” would be a far-fetched explanation. It other words, it is statistically significant. September has certainly suffered its share of out-sized losses (e.g., -30.70% in 1930, the largest monthly loss in history) and these large losses have served to skew the average returns further to the negative. However, at a nearly -0.50%, the median return is far and away the worst of any month as well (June’s -0.16% is the only other negative median return).

Now, obviously these averages and medians are the product of 100 years of samples. Some Septembers have been good for stocks while more have been bad. So the seasonal tendencies typically amount to a slight headwind or tailwind. In the case of September, though, the preponderance of historical evidence would suggest that stocks may be dealing with a decided headwind in September.