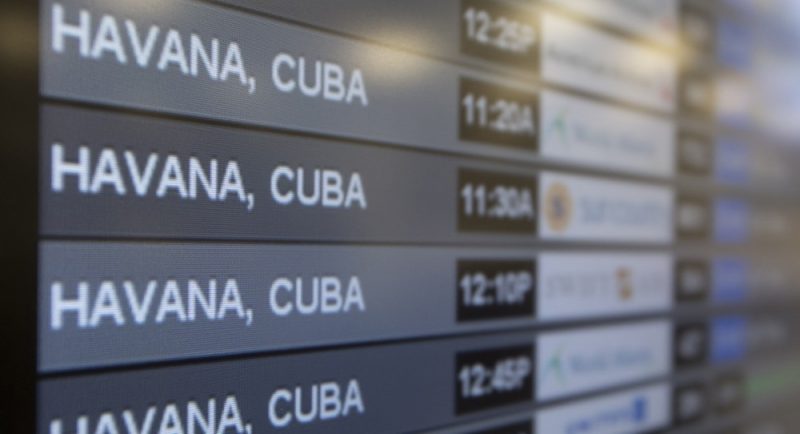 SANTA CLARA, Cuba : The first scheduled commercial passenger flight from the United States to Cuba in more than half a century landed on Wednesday, opening another chapter in the Obama administration’s efforts to improve ties and increase trade and travel with the former Cold War foe.

A JetBlue Airways Corp passenger jet arrived from Fort Lauderdale, Florida, in the central Cuban city of Santa Clara. The route may be a commercial challenge, at least initially, but it is the first of a plethora of new flights by various U.S. airlines to destinations on the Communist-ruled island.

U.S. Transportation Secretary Anthony Foxx, JetBlue Chief Executive Officer Robin Hayes, other officials and journalists were aboard the 150-seat plane. Regular travelers, including some of Cuban descent, occupied nearly half the seats on the flight to Santa Clara, a city with a population of about 200,000 that is known for its monument to revolutionary leader Ernesto “Che” Guevara.

While opening travel to cities like Santa Clara is seen as a foot in the door to expanding travel to the Cuban provinces, the market’s big prize is routes to Havana, which Foxx awarded on Wednesday. American Airlines Group Inc was awarded the biggest portion.

“The Havana competition was one of the most over-subscribed competitions that I’ve been a part of,” Foxx said in an interview before the plane took off. “I think that speaks to the interest on the part of the American people, and it also speaks to the level of commercial interest in the U.S. that exists.”

U.S. Secretary of State John Kerry noted in a Twitter message that the flight took place just over a year after the flag was raised at the reopened U.S. embassy in Havana. He called it “another step forward.”

Cuba and the United States began normalizing relations in December 2014 after 18 months of secret talks and have since restored full diplomatic ties. The countries had been hostile for more than five decades, since Fidel Castro ousted U.S.-backed dictator Fulgencio Batista in a 1959 revolution that steered the island on a communist course and made it a close ally of the Soviet Union.

Until Wednesday, passenger air links between Cuba and the United States were by chartered flights.

Obama’s opening to Cuba has included a landmark visit by him to the Caribbean island in March and a series of measures to increase commercial ties, but the U.S. president has been unable to persuade Congress to lift the longstanding embargo.

Critics of the detente argue the Obama administration has won few human rights concessions from President Raul Castro in exchange for allowing hotel chains, cruise lines and at least one U.S. bank to ramp up operations on the island.

The United States still prohibits its citizens from visiting Cuba as tourists, although there have long been exceptions to the ban, ranging from visiting family to business, cultural, religious and educational travel. The Obama administration has further eased the restrictions.

Lázaro Chavez, a 49-year-old pharmacist who lives in Miami and returns frequently to his homeland, said before boarding that he was taking the flight for two reasons. “One, I am going to see my family. Two, I want to be on this historic flight.”

‘FOOT IN THE DOOR’

JetBlue and other airlines may be setting themselves up to lose money on Cuba trips in the short run, said industry consultant Robert Mann.

“Most carriers look at international markets that have been restricted and are just opening up as an investment,” Mann said. “You need to get your foot in the door.”

Giselle Cortes, who oversees new international routes for JetBlue, said she expected demand on the route to pick up quickly and maintained that the Santa Clara flights would be financially successful for the airline.

Services on regional carrier Silver Airways and American Airlines Group Inc from the Miami-Fort Lauderdale area that is home to a large Cuban-American population, to Cuba’s outlying provinces will be the next to start, in September. Three other carriers will follow.

Santa Clara airport, where the JetBlue flight landed, has served as a gateway to nearby beaches for European and Canadian tourists who have been coming to Cuba for years, but the U.S. embargo – at least for now – bars Americans from such resort-oriented travel.