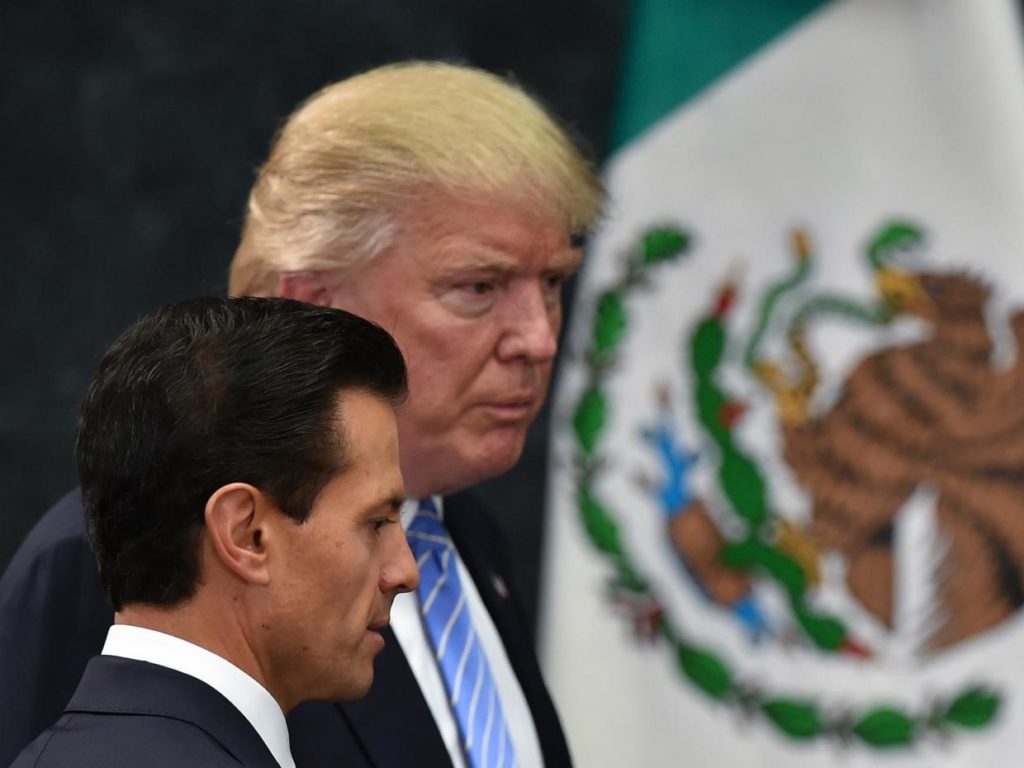 In his latest striking and unorthodox move, Trump announced last night via Twitter that he had accepted an invitation from Mexican President Enrique Peña Nieto for a meeting in Mexico today.  The meeting, set to take place just hours before he sets out proposals to crack down on illegal immigration that have stirred up widespread anger among Mexicans, is expected to cover a broad variety of topics including NAFTA, immigration and the contentious issue of border enforcement.The meeting with President Enrique Pena Nieto looked to be the type of dramatic, Trump-style event to ensure he dominates the headlines as he tries to close a gap in national opinion polls that now favors his opponent, Democrat Hillary Clinton.

According to LifeZette, Trump will include former New York City Mayor Rudy Giuliani, RNC Chairman Reince Priebus and Alabama Sen. Jeff Sessions in the meetings.  Trump and Nieto are expected to make brief statements to the press after the meeting though a full press conference is not anticipated.

The trip is completely unprecedented as no previous non-incumbent presidential nominee of a major party has ever traveled to Mexico as part of his campaign.  According to the Wall Street Journal, the announcement comes after Nieto sent an invitation to both Trump and Hillary last Friday.  Nieto’s office has said the invitation was well received by both campaigns but so far Trump is the only one to accept.

Both Trump and Nieto confirmed the meeting over Twitter last night:

I have accepted the invitation of President Enrique Pena Nieto, of Mexico, and look very much forward to meeting him tomorrow.

The Mexican government, which has bristled at Trump’s threats to wall off Mexico and tear up the North American Free Trade Agreement, also confirmed the meeting in a tweet, saying Trump had agreed to meet Pena Nieto in private.

I have accepted the invitation of President Enrique Pena Nieto, of Mexico, and look very much forward to meeting him tomorrow.

Pena Nieto later tweeted about the meeting, then added:  “I believe in dialogue to promote Mexico’s interests in the world, and chiefly, to protect Mexicans wherever they are.”  Trump has been pilloried by media in Mexico since he launched his presidential campaign last year with a barrage of broadsides against the country, saying it sent rapists and drug dealers north across the border.

The meeting appeared to be a gamble by Pena Nieto, whose popularity has slumped to all-time lows, and opposition politicians reacted with dismay. “Be part of the campaign of a candidate dedicated to insulting us? Why?” said former interior minister Alejandro Poire, retweeting #TrumpNotWelcome hashtags on Twitter.

Trump has said, if elected on Nov. 8, he would carry out his pledge to build a wall along the U.S. southern border with Mexico to prevent illegal crossings into the United States. He has steadfastly demanded that Mexico pay for the wall, a position Trump supporters cheer but which Mexican officials scoff at.

Talks between the Trump campaign and the Mexican government on the trip began after Trump decided last weekend to take up Pena Nieto on an offer to meet, a source familiar with the situation said. Trump is expected to meet the Mexican leader in Mexico in between fundraising events he has scheduled in California and his immigration speech in Phoenix, Arizona, on Wednesday night.

Both Mexican security services and Trump’s secret service have expressed concerns regarding the security of the event.

Trump has made conflicting statements about the Mexican people over the past several months, although his recent pivot seemed to soften his stance toward Hispanics, and he even ate this taco bowl to prove it:

For his part, Nieto also hasn’t been the most complementary of the Republican nominee having previously compared Trump to Hitler and Mussolini.  Per CBS, Nieto made the following comment about Trump which basically implies he is a fascist dictator that could ultimately start World War III:

Trump aides said he would reaffirm his determination to build the border wall to cut new illegal crossings and quickly deport illegal immigrants who have committed crimes in the United States. However, the central question facing Trump was how he would treat the majority of the 11 million illegal immigrants who have set down roots in their communities and obeyed U.S. laws, an issue that bedevils the immigration debate.