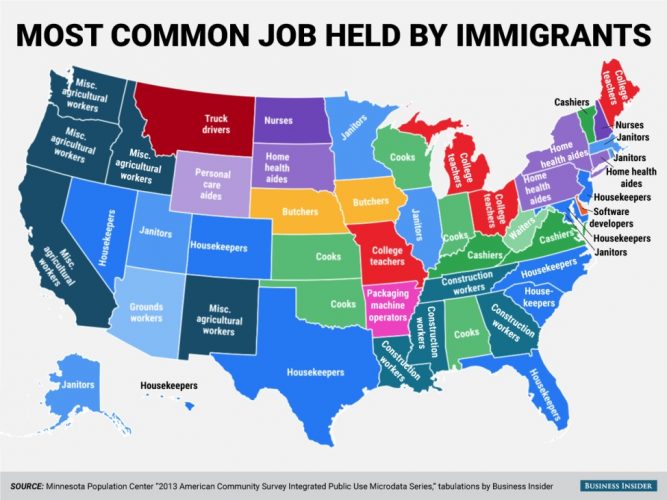 US : Immigrants work more and get paid way less

Immigrants in America work more, search for jobs more and get paid way less than native-born U.S. citizens. They’re a big chunk of the U.S. job market too. Documented and undocumented immigrants make up nearly 20% of America’s labor force, according to a report by Goldman Sachs.

Immigrants have a lower unemployment rate (4.3%) than native-born U.S. citizens (4.9%). They also participate more in the economy, meaning they’re either working or looking for work.But they make far less than native-born citizens. Immigrants weekly income is about $ 681. Native-born Americans earn $ 837 a week, according to Goldman. Immigration is a major factor in the economy’s ability to grow more jobs, policymakers say.

“If we were to allow more immigration into this country, of course that would augment the supply of labor so you could actually have more sturdy payroll gains,” William Dudley, President of the New York Federal Reserve, said Thursday.

It’s not just Dudley. Moody’s Analytics economist Mark Zandi estimates that 77% of the potential job gains under Hillary Clinton’s economic plan would come from immigration reform. Clinton has called for a pathway to citizenship for undocumented workers and visas for high-skilled foreign workers.

Increasing the U.S. population is one key factor to creating more jobs and immigrants play a major role. According to the Pew Research Center, immigrants have made up 40 to 50% of the population gains in recent years.

However, the future of immigration is up in the air because of the U.S. elections in November.

Republican presidential nominee Donald Trump has put immigration center stage on the campaign trail, claiming he would build a wall along the border with Mexico and deport all 11 million undocumented workers.

Zandi, the economist, said such immigration measures would cost the U.S. jobs. (Zandi, an economic adviser to Republican John McCain, has also donated to Clinton’s campaign). Other experts have said Trump’s immigration proposals would be a net negative for job growth in America.

“If Trump’s policies were implemented on immigration…in terms of the economics effects, it would be devastatingly bad,” says Joel Prakken, an economist and managing director at Macroeconomic Advisers, a forecasting firm in St. Louis.