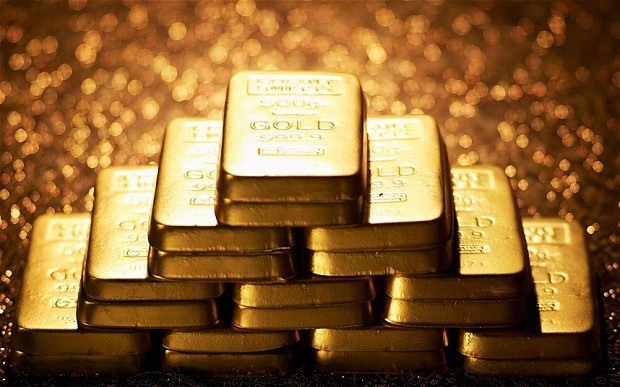 She has no formal training in finance. She’s not running a multi-billion dollar portfolio. And yet, as the Wall Street Journal reported on Monday, “[w]hen Ms. Hoffman heard the ECB was knocking rates below zero in June 2014, she considered it ‘madness’ and promptly cut her spending, set aside more money, and bought gold.”

She’s right. It is madness. Stock markets around the world are at all-time highs even as corporate profits have been in long-term decline. And in a growing number of countries, even doing absolutely nothing and holding money in the bank means that you’ll be penalized with negative interest.

These risks are even worse for major “institutional” investors like pension funds. Big investors have far fewer investment options than regular people like us. They need extremely large markets to deploy their capital.

A senior investment manager at one of China’s sovereign wealth funds once told me they only consider deals that are at least $ 1 billion or more. Anything else is just too small, no matter how attractive.

This is why it’s so great to be a smaller investor. We have recommended unique investments to members of our premium services, for example, that generate anywhere from 5% to 12% in very safe returns that are fully backed at a substantial margin by real assets (including gold).

That’s why large investors end up buying government bonds: the market is enormous. The market for US Treasuries, for example, is $ 19 trillion. So even if you’re managing $ 200 billion, the market size for US government bonds is big enough that you could easily snap up Treasuries.

It’s the same with stocks. Wal Mart, Apple, Toyota, Samsung… the market size of large public companies is worth tens of trillions of dollars, big enough for major funds to invest.

But again, that’s precisely the problem. Almost every single market and asset class that’s big enough for major institutional investors is at/near its all-time high. The yields on government bonds are at the lowest levels in recorded history (and in many cases even negative). Stocks are at record highs at a time when corporate profits are in decline.

Many funds around the world (especially in Europe) have been jumping into the US market as a “safe haven” against all the Brexit uncertainty. Yet they’re doing so at a time when the US dollar is at a multi-decade high, and both US stocks and bonds are at all-time highs.

It’s generally not the greatest investment strategy in the world to buy assets at their all-time highs… you’re taking on a LOT of risk. But major funds and institutions have very few options available.

Simply due to their massive size, they’re chained to these risky asset classes. Even doing nothing and holding money in the bank could mean paying negative interest.

But there is one very big exception: gold.

The total market size for gold, as estimated by the World Gold Council, is more than $ 7 trillion. That’s a big market, more than sufficient for institutional investors to deploy billions, even tens of billions. Central bankers have been doing it themselves, snapping up hundreds of tons of gold in recent years. (The Chinese bought tens of billions of dollars worth of gold in the last year.)

Yet unlike stocks and bonds, gold is NOWHERE NEAR its all-time high, at least in US dollar terms. In fact gold can still appreciate nearly 50% before it breaks its previous price record. This means that GOLD is about the only major asset class that isn’t anywhere close to its all-time high, but still a big enough market for institutional investors.

Stocks are very expensive. Bonds are insane. Bank rates are negative for many large investors. But gold is still historically inexpensive despite having appreciated substantially this year. So gold should become much more attractive to large investors, especially since there will likely be more debt, more money printing, more capital controls, and more monetary insanity in the future.

These trends are pretty clear. And if you understand them, the case for owning at least a small amount of gold is obvious.

Don’t fall in love with gold. Don’t maintain a religious devotion to it. And don’t dive in headfirst with your entire life’s savings. Accumulate slowly.

But do recognize that there’s no other global, highly liquid asset that increases in value as governments and central banks decline. So having even just a little bit of gold can be an excellent insurance policy.