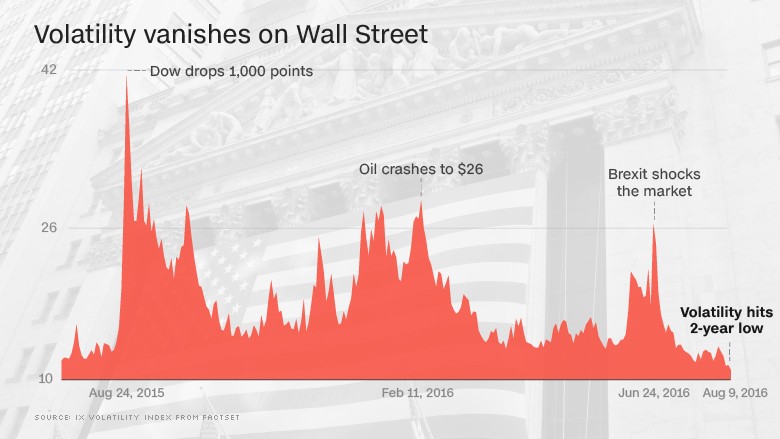 The stock market has gone quiet. Perhaps too quiet.

An eerie calm has washed over Wall Street in recent weeks, especially compared with the wild bouts of turbulence that rocked the markets earlier this year.

The closely-watched VIX volatility index recently slipped below 11.4, touching its lowest level in more than two years. By comparison, the measure of market turbulence was sitting at nearly 31 last September and it’s almost never been in single digits.Some see this, along with a string of record highs for the American stock market, as a sign that investors have become so comfortable with the state of things that they don’t see the dangers that lurk around them. They argue this is the calm before the storm, especially given nervousness about the global economy, the upcoming U.S. elections and Corporate America’s yearlong profit recession.

Stovall noted that August and September together account for one-third of all months where the S&P 500 plunged by 5% or more. Obvious examples include August 2015 and September 2008 when Lehman Brothers imploded.

Others agree that volatility is likely to rise from here, though the trigger and timing for more turbulence is of course a big mystery.

“You just don’t get much lower than this,” said Scott Wren, senior global equity strategist at the Wells Fargo Investment Institute. “Stocks don’t just go straight up forever without corrections. We probably need to have a pullback.”

To Wren’s point, the Dow is up more than 3,000 points since mid-February alone. That’s a stunning move.

Of course, it shouldn’t be shocking that volatility is low during the notoriously low-volume month of August when many investors hit the beach. And there’s no guarantee that market turbulence will return any time soon. It’s possible that low volatility is here to stay, at least for a bit.

“The VIX is by no means a singularly predictive indicator of future market activity. It can, and has stayed low for long periods of time,” David Joy, chief market strategist at Ameriprise Financial, wrote in a note.

But there is no shortage of potential catalysts that could upend the recent calm. Here are just a few:

Renewed oil crash: Oil prices freaked investors out earlier this year when they crashed to $ 26 a barrel before rebounding to $ 50. But more recently, that too has been derailed by renewed oversupply concerns and prices are back around $ 40. It would certainly get investors nervous again if prices fall a lot lower from here.

U.S. presidential election: So far, the markets have largely shrugged off the presidential contest between Donald Trump and Hillary Clinton. That could be because investors anticipate divided government no matter who wins, or because the election is simply too far away for Wall Street’s short-term mentality. In either case, that could change in the coming weeks and months, especially given the unpredictable nature of this race.

BlackRock, the world’s largest asset manager, predicts an election-fueled rise in volatility ahead. The firm pointed to how investors have yanked money from U.S. equity funds in the month prior to each of the past four presidential elections.

China, global economy: Don’t forget that last August’s relative calm was shattered by a surge in fears about China’s economy suffering a hard landing. Recall the brief 1,000-point Dow plunge on August 24. While the world has taken a hiatus from China fears, there’s no guaranteeing that the won’t reappear again.

Wildcard: It’s never easy to figure out what unforeseen issue will spark concern on Wall Street. Geopolitics, natural disaster, health scares or anything else could end up spooking investors.

“Like most market shocks, unless it’s something that adversely affects the overall economy, it will probably be short-term,” said Stovall.