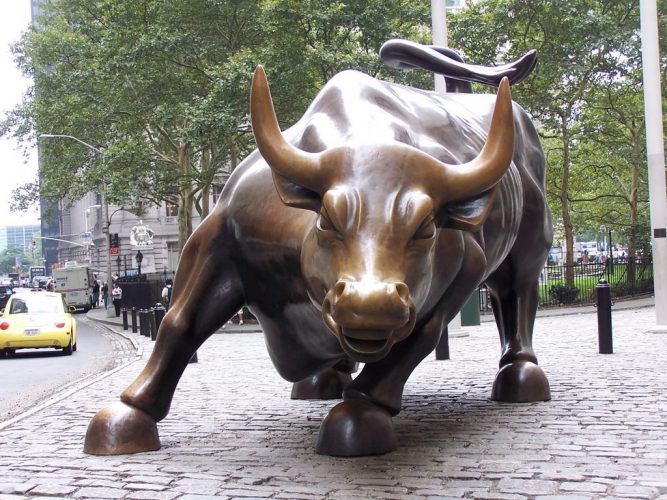 Short Term Remains Risky, but Tide May Be Turning in Bulls’ Favor

All major indices finished sharply higher last week despite the market’s continued day-to-day choppiness. The tech-heavy Nasdaq 100 led the pack, gaining 3.5% after a big decline the week before.

It will still take a sustained rise above the market’s all-time highs — at 2,135 in the S&P 500 and 18,351 in the Dow industrials — to confirm that a new intermediate-term advance is beginning. However, the sharp bullish reversal has set up a potential intermediate-term buying opportunity, as I anticipated in last week’s report, complete with some attractive risk/reward parameters.

Asbury Research’s ETF-based metric shows the biggest inflow of assets on a percentage basis during the past one-week and one-month periods went to utilities, while the biggest outflows came from financials. The performance of both of these sectors was driven by the recent collapse in long-term U.S. interest rates, which adversely affects the profitability of lending institutions and helps drive yield-seeking investors into riskier but better-paying utilities.

A Tale of Two Patterns

In last week’s Market Outlook, I pointed out the June 24 breakdown in the SPDR Dow Jones Industrial Average ETF (NYSE: DIA) after two months of investor indecision. I said it targeted a decline to $ 168.50 that would remain valid below the lower boundary of the indecision area at $ 175.30.

The chart below shows DIA tested and loosely held its 200-day moving average last week before moving back into the boundaries of the pattern by rising above $ 175.30. 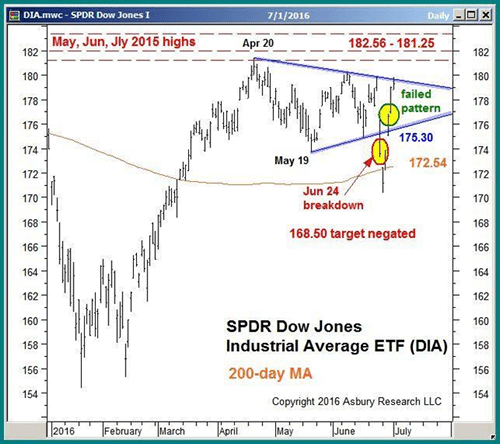 This successful test indicates that the market abruptly changed its mind and is now betting that DIA’s major uptrend — as defined by the 200-day moving average — is still intact and resuming. Last week’s big reversal sets up another test of major overhead resistance at $ 181.25 to $ 182.56, the 2015 highs that correspond to 18,351 in the Dow.

The weekly chart of the Dow Jones Industrial Average shows the bellwether index broke out from a similar but much larger period of investor indecision in mid-April. The current breakout targets an advance to 20,400, which is 14% above Friday’s close and will remain valid as long as the upper boundary of the pattern near 17,446 loosely contains as underlying support. 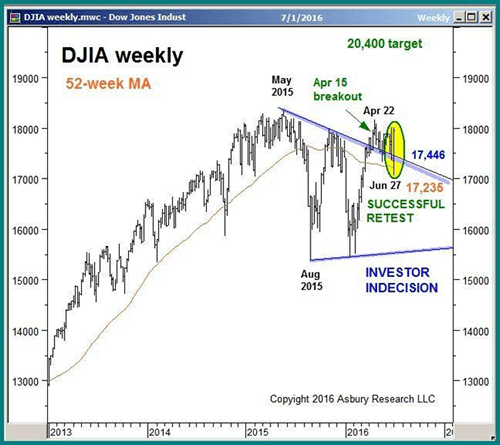 As we can see, the Dow tested, loosely held, and then spiked higher from this support last week. The combination of a failed bearish daily pattern and an intact bullish weekly pattern suggests a potential intermediate-term buying opportunity that will remain valid as long as the Dow stays above the June 27 low at 17,063.

Abating Investor Fear is Another Positive

In last week’s report, I said the recent fear-driven spike in the Volatility S&P 500 (VIX) above 23 suggested the market’s recent collapse could lead to a better buying opportunity in the weeks ahead.

Last week, the VIX collapsed back below its 50-day moving average, which represents an extreme in investor complacency that history shows has coincided with every near-term rise in the broader U.S. market over the past several years. 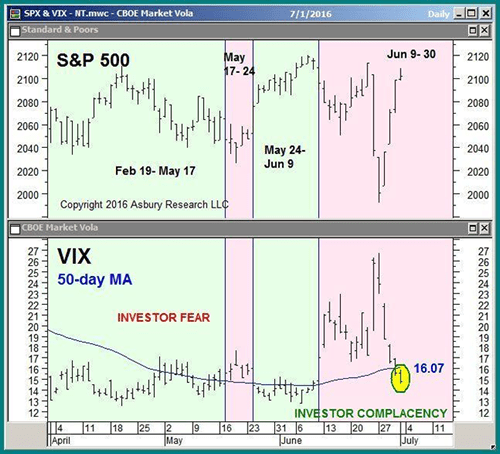 If the VIX is able to stay below its 50-day at 16.07 this week, I expect the rally in stocks to continue.

Editor’s note: The VIX’s daily movements resemble an EKG, and while this can be scary for investors, there are trading strategies that benefit from such an environment. And they aren’t all high-risk either. In fact, one is a retirement strategy that’s helping people collect an extra $ 386 or more every week. Find out how you could get in on the action as early as Thursday.

One of the big investor fears during the first half of this year was global deflation. Declining commodity prices indicate a lack of global demand, which typically drags down equity prices. However, I have been pointing out emerging strength in a growing list of commodities that the financial media has been largely ignoring. Most recently, I discussed strength in copper in the May 23 Market Outlook.

This week, I’m covering yet another building and manufacturing-related commodity that is showing signs of more upcoming price strength: steel. 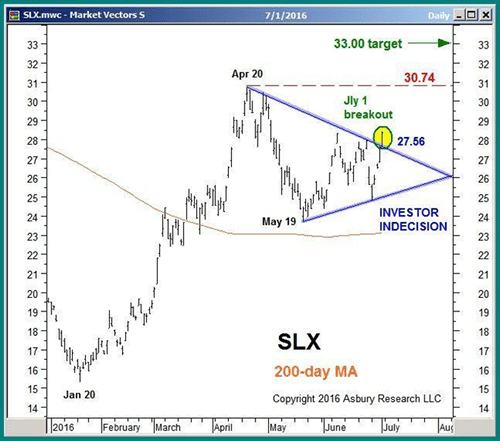 Friday’s breakout targets a move to $ 33, which is 16% above Friday’s close. However, Monday’s selling took the ETF back into the indecision area. The upper boundary at $ 27.56 must loosely contain prices as underlying support for the target to remain valid.

The U.S. stock market continues to be a treacherous place for investors. Huge daily swings in the major averages seem to cause investors to move into and out of the market at precisely the wrong times. I believe much of this activity is due to algorithmic traders, who have apparently taken over the market on an intraday basis. The current low-volume environment has allowed relatively small amounts of money to greatly influence market direction for short periods of time.

However, I also believe the intermediate-term time frame still belongs to the investor. And last week’s successful test of formidable underlying support near 17,446 in the Dow industrials suggests that investors are still betting on significantly higher equity prices during the second half of the year. Higher prices are also supported by continued strength in a number of commodities, most recently steel.

If market volatility remains low, the rally in stocks is likely to continue. 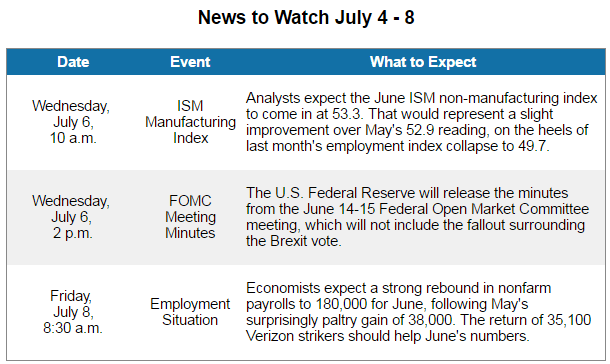