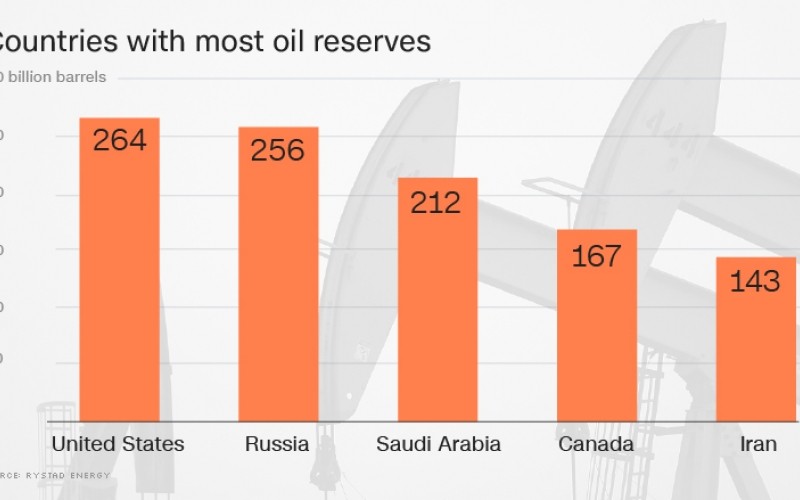 U.S. has more untapped oil than Saudi Arabia or Russia

Move over, Saudi Arabia and Russia. America now has more untapped oil than any other country on the planet.

That’s according to a new report from Rystad Energy that estimates the U.S. is sitting on an incredible 264 billion barrels of oil reserves. It includes oil in existing fields, new projects, recent discoveries as well as projections in undiscovered fields.

More than half of America’s untapped oil is unconventional shale oil, according to Rystad. Shale oil is the previously-unreachable crude that, thanks to fracking and new technology, has reshaped the global energy landscape and vaulted the U.S. into the upper echelon of global oil producers.

“This has been a revolution. Ten years ago nobody would have dreamt this would have been the result,” Jarand Rystad, CEO of Rystad Energy, told CNNMoney. 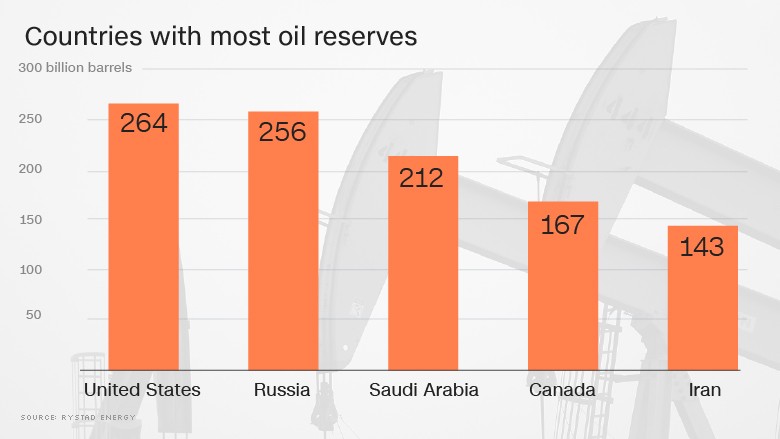 The findings suggest the U.S. could shoulder even more of the weight of global oil production in the future, especially as prices recover. U.S. output has declined modestly over the past year as a result of oil prices crashing to levels that aren’t profitable for all but the best shale oil fields.

But there are seas of oil just waiting to get tapped once oil prices rebound. Texas, home to the Eagle Ford, Permian and Barnett shale oil plays, holds more than 60 billion barrels of shale oil alone, Rystad estimates. That’s more than the untapped oil in all of China. There are also vast sums of oil beneath the ground in North Dakota, where the Bakken shale oil play sits.

Thanks to the shale oil boom, the U.S. is now sitting on more oil reserves than Russia, which Rystad estimates as having 256 billion barrels of untapped oil. The next-richest countries in terms of oil after that are: Saudi Arabia (212 billion), Canada (167 billion), Iran (143 billion) and Brazil (120 billion).

Rystad, an independent research firm based in Norway, argues its estimate does a better job of capturing the real picture of global oil reserves than more conservative metrics often cited.

“The upside potential is much larger in the United States,” Rystad said.

All told, the world has 2.1 trillion barrels of untapped oil, or 70 times the current global annual production rate, Rystad estimates.While that may sound like a ton of oil, Rystad argues it’s actually proof that “there is a relatively limited amount of recoverable oil left on the planet.”

That’s a big deal given the fact global oil demand continues to grow, even in today’s sluggish economy. Many expect that growth to remain steady or even accelerate as people in fast-growing economies like India and China buy cars.