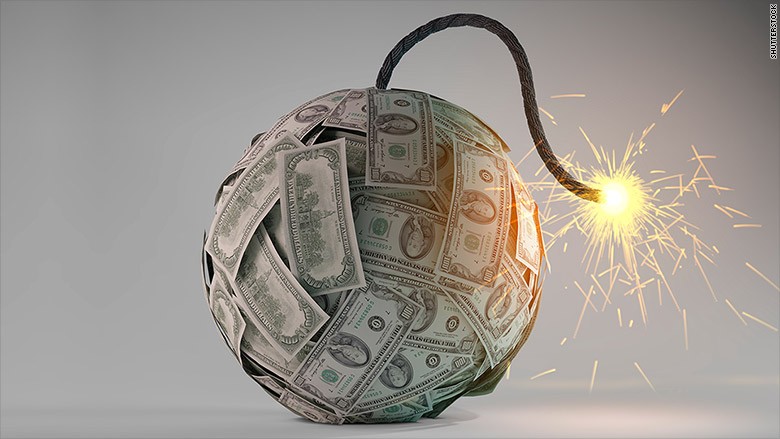 Do You Have This Ticking Time Bomb In Your Portfolio?

After eight years of short-term interest rates near zero, there has been a lot said about how the Fed’s easy money policy (aka ZIRP) has benefited investors at the expense of savers.

However, it’s fixed-income investors who may get their heads handed to them in the months – and even years – ahead.

Most have a ticking time bomb in their portfolio. And if you’re one of them, now is the time to defuse it…

There’s a common perception that the Fed’s ultra-low interest rate policy is an attempt to force investors out of cash and into stocks and bonds.

The central bank is trying to help Main Street. Low interest rates make it cheaper for businesses to expand (and hire) and for consumers to spend. But a byproduct of this monetary policy has been rocket fuel for equity and bond markets.

So investors have understandably gravitated to higher-yielding stocks and bonds, fueling a rally in both. The problem is that bonds don’t pay much anymore either.

10-year Treasurys today yield less than 1.7%. Sad as that is, these are some of the developed world’s highest-yielding government bonds. Since January, many countries have seen government bond yields hit record lows.

Some are yielding less than nothing. German 10-year yields dropped below zero for the first time ever on Tuesday.

Yields are pathetic even at the long end of the spectrum.

British government bonds are yielding less than 2% for 50 years. In Japan, yields have plummeted to silly levels. A 40-year bond yields 0.35%.

Who in their right mind would lock up their capital for that long at such a paltry rate?

Remember the hyperinflationary early ’80s? Consumers and investors were certain that double-digit inflation was here to stay. So they loaded up on inflation hedges galore: commodities, gold, silver and platinum.

Then they watched them wilt like last week’s roses for more than two decades.

Fixed-income investors are setting themselves up for a similar disappointment. Having seen rates so low for so long, they now believe they will always be in the cellar.

History shows that is not the case. And bond prices move inversely to interest rate changes. In other words, when rates rise, bonds plunge.

Interest rates may stay down a while longer. (After all, no one – and I mean no one – was predicting eight years of ZIRP eight years ago.) But there will be a bloodbath when rates eventually move higher.

For 35 years now, interest rates worldwide have been coming down.

(Consider that if you are 35 or younger, your entire life has been one long bull market in bonds.)

Investors now think of fixed-income securities as safe, conservative investments that provide some income along with a bit of capital appreciation.

But capital depreciation could easily offset future income distributions. Not just for months – but for years.

This will come as a shock to many, as they are psychologically unprepared for it. (After all, this is their safe money.)

Don’t be one of them. Look at your total bond allocation. Make sure you have not overweighted fixed-income investments. Avoid long-term maturities. Pare back on medium-term maturities.

And sell ALL your leveraged closed-end bond funds. Yes, those safe-sounding ones that sport high yields. They are using leverage – margining the portfolio – and will take the biggest beating when rates rise again.

As an investor, you need to do the same. Reduce your bond market exposure now.

One day – and it may be sooner than you expect – you’ll be glad you did.