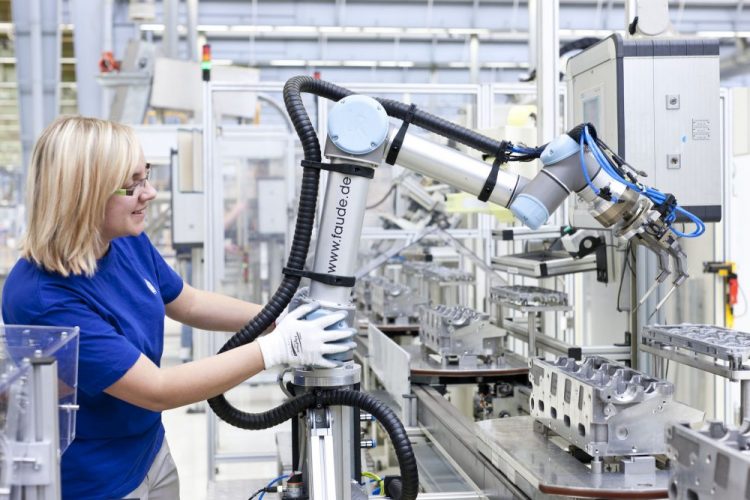 * Cobots are inexpensive, safe, easy to use

MUNICH, Germany, June 23 Robots that work as assistants alongside people are set to upend the world of industrial robotics by putting automation within reach of many small and medium-sized companies for the first time, industry players said this week.

Collaborative robots, or “cobots”, tend to be inexpensive, easy to use and safe to be around. They can easily be adapted to new tasks, making them well-suited to small-batch manufacturing and ever-shortening product cycles.

Cobots can typically lift loads of up 100010 kilograms (22 lb) and can be small enough to put on top of a workbench. They can help with repetitive tasks like picking and placing, packaging or glueing and welding.

Some can repeat a task after being guided once through the process by a worker and recording it. The price of a cobot can be as little as $ 10,000, although typically they cost two to three times that.

The global cobot market is set to grow from $ 116 million last year to $ 11.5 billion by 2025, capital goods analysts at Barclays estimate. That would be roughly equal to the size of the entire industrial robotics market today.

“By 2020 it will be a game-changer,” said Stefan Lampa, head of robotics of Germany’s Kuka, during a panel discussion organised by the International Federation of Robotics (IFR) at the Automatica trade fair in Munich.

Growth in industrial robot unit sales slowed to 12 percent last year from 29 percent in 2014, the IFR said on Wednesday, weighed by a sharp fall in top buyer China.

The world’s top industrial robot makers – Japan’s Fanuc and Yaskawa, Swiss ABB and Kuka – all have collaborative robots on the market, although sales are not yet significant for them.

But the market leader and pioneer is Denmark’s Universal Robots, a start-up that sold its first cobot in 2009 and was acquired by U.S. automatic test equipment maker Teradyne for $ 285 million last year.

“We are approximately doubling every year, in terms of units. That’s our ambition and we have almost hit our ambition every year for six straight years,” co-founder Esben Ostergaard told Reuters in an interview.

Ostergaard and his co-founders were already working on robotics at university together when the Danish ministry of food launched an initiative to get more robots into the Danish food industry to be more competitive.

They realised that existing robots were not suitable for the industry’s frequent seasonal product changes.

“They could not readjust the robots. The whole machine weighed 500 kilos. It was very expensive. And most of all it was impossible to teach them how to programme it,” Ostergaard said.

U.S. competitor Rethink Robotics – another pure-play cobot maker, whose investors include Amazon founder Jeff Bezos – announced this week that logistics giant DHL had ordered several of its Baxter and Sawyer smart cobots for testing in its warehouses on tasks such as packing and assembly.

These smaller, leaner companies typically do not rely on the expensive maintenance contracts that earn fat margins for more established players – partly because the cobots tend to be simple and pay back their costs within months.