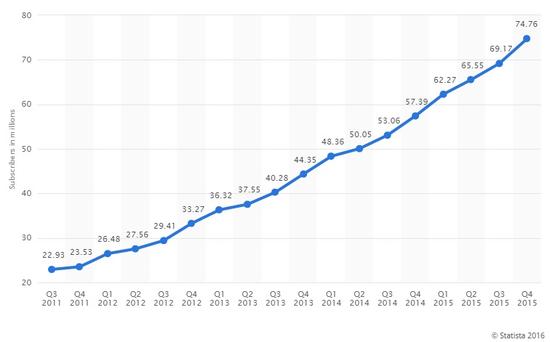 Netflix (NASDAQ:NFLX) is one of the most expensive stocks in the CATV (Cable Television) Systems industry with a P/E ratio of about 360.93x.

This compares adversely to Time Warner Cable’s (NYSE:TWC) 31.73x while Cablevision Systems(NYSE:CVC) currently trades 51.95 in P/E. Dish Network (NASDAQ:DISH) offers the best value for money based on this valuation multiple with a P/E ratio of 29.99x while the current industry average stands at 40.40x.

So what makes Netflix so special that investors are willing to pay such a hefty premium to own a stake?

Netflix has been on a customer acquisition campaign over the last few years and recently rolled its streaming service to more than 130 countries to add to its already expansive network. Netflix is an internet-based premium video streaming service that offers its subscribers various television shows and blockbuster movies.

Initially, the company offered secondary content from other TV shows and films service producers, but it has over the last two years begun to provide its own original content in the form of TV shows and movies.

This move has seen it grow its subscriber base tremendously from a mere 36 million subscribers at the end of the first quarter in 2013 to about 75 million at the end of 2015. That’s more than double the figures in less than three years.

Based on the chart above, it is clear that the subscriber growth has been steady since the start of 2014, and in recent quarters, the growth rate actually appears to have accelerated. The figure for the first quarter of 2016 is likely to show even more growth after the company rolled out its service to the rest of the world in January.

Not afraid to square with big guns

Netflix’s business model is unique in a way given its ability to compete in both the television industry and the movie market. The network now directly competes with the likes of IMAX Corporation (NYSE:IMAX), Viacom (NASDAQ:VIA), the parent company of Paramount, andTwenty-First Century Fox (NASDAQ:FOX) in the film and TV show distribution market.

Netflix has also entered the production market as it continues to produce its own original content. This gives it an advantage in terms of controlling profit margins. The company is keen to go toe-to-toe with industry leaders in film production and recently signed Will Smith in what is now its biggest movie deal yet, at the expense of Time Warner.

Netflix outbid Time Warner to produce and distribute a police thriller film “Bright” starring Will Smith. The company will spend about $ 90 million including $ 45 million for shooting and $ 3 million for script while the rest will go to talent fees.

This film will be an addition to Netflix growing library of original films. The network recently added “Crouching Tiger, Hidden Dragon: Sword of Destiny,” which is a sequel to the 2000 martial arts film, “Crouching Tiger, Hidden Dragon.” While this movie seemingly appears to be a huge title for Chinese martial arts films, Netflix’s biggest hit movie has been Adam Sandler’s “The Ridiculous 6,” which according to the network continues to top the charts in all regions in terms of audience. Sandler is now working on his second comedy to be produced and released via Netflix.

Netflix also committed $ 60 million for the upcoming Brad Pitt movie “War Machine,” which ideally set the tone for the company’s next series of projects. Netflix is not afraid of throwing punches with the big players. The company is beginning to commit a lot of money for original content, which will be crucial in implementing its frightening business model.

Now, while some films tend to underperform after production thereby missing box office targets, Netflix does not need to worry about the possibility of viewers not turning up to watch the film. This is because, regardless of whether or not Netflix streaming service subscribers want to watch a movie after it’s added to the network, they will still pay the monthly subscription unless they completely opt out.

This means that, with Netflix’s business model, even those who only prefer comedy end up paying for action-packed content that’s within the network over a given period. It’s more like a cost-sharing platform, where everyone contributes a tiny chunk for what they like as well as for what they do not like.

Ideally, the average cost for a movie ticket is about $ 8.70. Last year’s average was $ 8.40 according to Box Office Mojo. This figure is more than Netflix’s lowest monthly subscription fee of $ 7.99 and is only just slightly lower than the network’s most popular package which costs a monthly fee of $ 9.99.

This means that, with one movie ticket, you could possibly get a full month worth of streaming service from Netflix. During this period, you will not just have access to the single movie that drew your attention but also several other movies and TV shows that possibly could be of interest to you.

This is one of the reasons why Netflix’s subscription numbers have been growing steadily over the last three years. The consistent growth in subscriber base means that, whenever Netflix produces an original movie or TV show, it does not have to hope that the audience numbers will be good because subscribed viewers will have already paid for it. If the movie happens to attract new subscribers, then that would be a bonus.

On the contrary, movies produced and released via theaters have to hope that the numbers will be good enough to cover the costs incurred in production. In other words, Netflix knows whether or not it can afford to produce a certain movie in advance, whereas for movies distributed via theaters, it is a case of “to be determined.”

And while the survey suggested that Netflix is more likely to be complementing TV rather than killing it, as the company’s subscription numbers continue to soar it will only be a matter of time before it begins to produce huge blockbuster movies.

In addition, Netflix won’t have to worry about who’s going to watch its movies from a revenue perspective because, based on its current business model, revenues are booked in advance. All that Netflix has to do is keep producing original and high-quality content to retain its rapidly growing subscriber base.