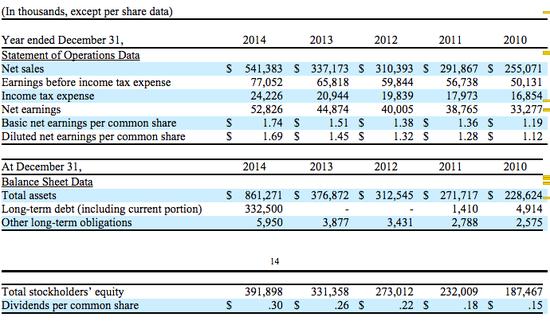 The Best Performing Stock You Haven’t Heard Of

Recently, I’ve come across a list of top 10 best performing U.S. stocks of the past 30 years. The list includes many names such as Apple (AAPL), Home Depot (NYSE:HD) and UnitedHealth Group Incorporated (NYSE:UNH). In the past 30 years, Apple has delivered an annual gain of 21.13%, while Home Depot and UnitedHealth Group enjoy the annual return of 24.27% and 22.16%. Interestingly, the best performing company sounds quite unfamiliar to me, and I don’t think it’s famous in the media. It’s Balchem Corporation (NASDAQ:BCPC), with the annual return of 26.18% in the past 30 years.

Balchem has a diversified customer base. Most of its customers are major national and multi national corporations. In the past three years, no one customer accounted for more than 10% of the total company’s revenue.

What makes me impressed is the continuous growth of Balchem’s operating businesses. In the five-year period from 2010 to 2014, Balchem delivered ongoing growth in both net sales and EPS. The revenue rose from $ 255 million in 2010 to $ 541 million in 2014, while the diluted EPS rocketed from $ 1.12 to $ 1.69. It also paid increasing dividends. The dividend payment per share had doubled from 15 cents to 30 cents.

On the balance sheet, Balchem has a reasonable amount of leverage. While the equity was $ 457.3 million at the end of the third quarter 2015, the interest bearing debt was around $ 306 million. In the third quarter, it also held quite some cash at $ 81.6 million. Therefore, the net debt was lower at $ 224.4 million. Interestingly, the debt was at a quite low interest rate at 1.70% in Sept. 2015, with the maturity date of May 2019.

Goodwill and intangible assets with finite lives made up most of the company assets, as the company has kept expanding its business via mergers and acquisitions. Most of the goodwill was allocated to SensoryEffects segment, at $ 363.7 million, or 94.7% of the total goodwill. It seems that Balchem has not paid up much for its acquisitions, as described above, that SensoryEffects are the segment that generated the highest operating margin of 39.4%.

In the trailing 12 months, the operating cash flow came in at $ 115 million, while the depreciation was $ 40 million. Thus, we can roughly estimate that the free cash flow of Balchem was $ 75 million. At the current price of $ 456.14 per share, the market is valuing Balchem at $ 1.71 billion. The free cash flow multiple is quite high at 22.8x.

Balchem is really a good company that enjoys continuous growth in both top and bottom line. Indeed, it has made its long-term investors a lot of money, compounding at more than 26% annual return in the past 30 years. We should keep Balchem in our stock checklist. However, the current valuation seems to be a bit stretched. I would rather wait for a cheaper price to buy this stock.