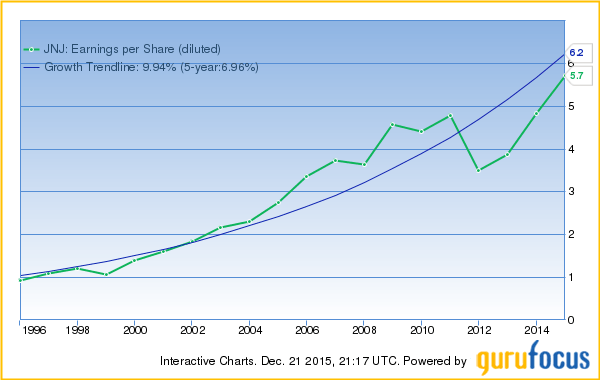 Biotech and pharmaceutical stocks made some of the biggest headlines this year, as 2015 saw massive waves of M&A activity, including the Pfizer (NYSE:PFE) and Allergan (NYSE:AGN) merger, the second-largest deal of all time valued at $ 160 billion. Other companies found themselves in the spotlight for less than desirable reasons, such as Valeant Pharmaceuticals (NYSE:VRX), whose stock has tanked in the past several months.

Using GuruFocus’ All-in-One Screener, there are several stocks in the industry held by a wide number of gurus that may be worth more research, even in the often volatile pharmaceutical sector.

Five gurus purchased new positions in Johnson & Johnson during the third quarter, including Chuck Royce (Trades, Portfolio) and Charles Brandes (Trades, Portfolio). In total, 39 gurus hold stakes in what is likely the most well-known pharmaceutical company in the industry. James Barrow (Trades,Portfolio) of Barrow, Hanley, Mewhinney & Strauss is the largest shareholder among the gurus with about 15.4 million shares.

On Dec. 4, Johnson & Johnson announced it completed the acquisition of Novira Therapeutics for an undisclosed amount. Novira was a privately held company developing treatment for chronic hepatitis B virus infection.

The stock has held steady for the past year and is down just 4%. The company trades at 19.89x earnings and is currently priced at $ 102.69. Two of Johnson & Johnson’s pharmaceutical products were recently approved for use in the U.S.: Edurant, which treats HIV in pediatric patients, and an injectable to treat schizophrenia.

Merck’s products include vaccines, oncology treatments, consumer products and animal health products. It currently has three products that have moved forward from Phase III and are under review, including a treatment for chronic hepatitis C virus infection.

Merck is down 9% for the year and currently trades at 13.8x earnings at $ 51.69. The company is also fairly valued according to the Peter Lynch earnings line, which estimates the price at a PE of 15. 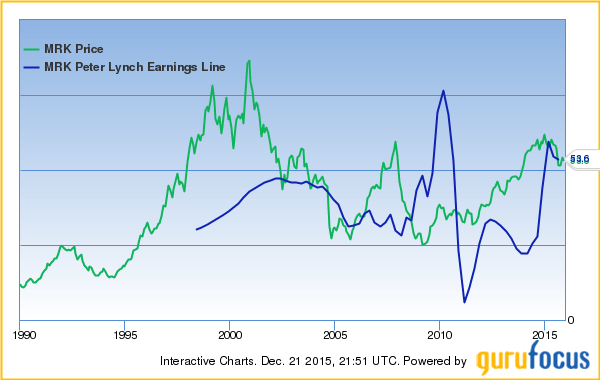 The company earned 64 cents per share in the third quarter compared to 31 cents per share the prior year. The trailing dividend yield is 3.51% with a payout ratio of 48%.

Amgen produces medicines that treat serious illnesses and diseases that have a limited number of treatment options. Some of its more well-known products include Enbrel for rheumatoid arthritis and Prolia for postmenopausal osteoporosis.

The stock has held steady over the past year and is up just 1%, trading at $ 161.13, or 19x earnings. Amgen earned $ 2.44 per share during the third quarter, up from $ 1.61 the prior year. The company’s EPS has risen consistently over time, as shown in the graph below. 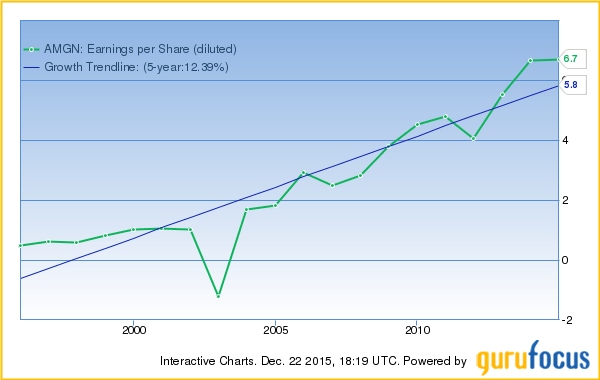 Eighteen gurus currently hold positions in Teva Pharmaceutical, with John Paulson (Trades,Portfolio) holding the largest stake with 2.11% of shares outstanding. Andreas Halvorsen (Trades,Portfolio) started a new position in the third quarter and is now the third-largest shareholder with a 1.04% stake.

In July, Teva announced it would acquire Allergan’s generic drug business for $ 40.5 billion. The move will make Teva a Top 10 global pharmaceutical company, and the deal is expected to close in the first quarter of 2016. Last month, Teva announced plans to sell $ 6.75 billion in stock in order to help finance the deal. 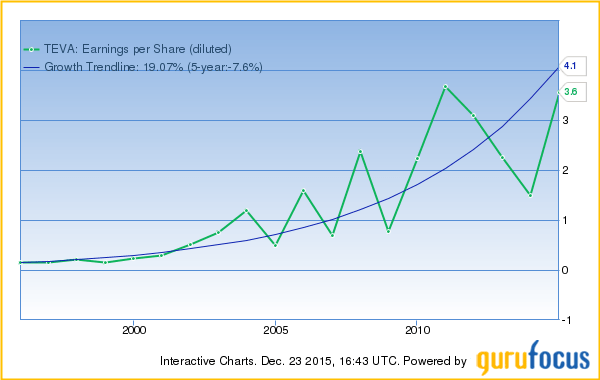 Biogen is rated as a perfect 5 stars for its business predictability by GuruFocus. The company develops therapies for serious neurological, autoimmune and rare diseases.

Biogen has one product in the pipeline that has passed Phase III and is in the filing stage, which is a therapy that could help patients who experience relapsing-remitting multiple sclerosis attacks. It has five other products in Phase III, including therapies for Alzheimer’s, spinal muscular atrophy and lymphoma.

The stock is down 12% for the year and currently trades at 19.6x earnings. Biogen is one of the strongest biotech stocks among guru holdings with EPS that has steadily increased over time. 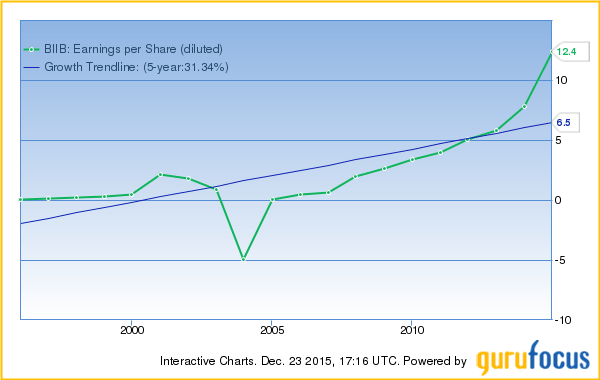 The company’s operating margin has also increased, often a rarity among pharmaceutical companies, and was 40.8% in 2014.