Data showed UK inflation dropped to a three-month low of 10.5% in December, the latest sign that global inflationary pressures are abating. European shares climbed after a string of positive earnings updates.
Europe’s STOXX 600 index (.STOXX) rose to its highest level since April 2022.

These were an expectation for a dovish pivot from the U.S. Federal Reserve, economic data that showed companies working overtime to deal with order backlogs, and China’s economy re-opening faster than expected from COVID-19 lockdowns.
MSCI’s broadest index of Asia-Pacific shares outside of Japan (.MIAPJ0000PUS) rose 0.4%.

JAPAN
The market spotlight was also on Japan, where the yen slid and government bond yields fell the most in two decades at one point, retreating sharply from the central bank’s 0.5% ceiling after policymakers decided to keep yield curve controls in place.

In a Reuters poll, 97% of economists expected the BOJ to maintain its ultra-easy policy at the meeting.

“It was a tough day for the bond vigilantes who were positioned to bully the BOJ into a policy change not justified by their economic forecasts,” said Sean Callow, a senior currency strategist at Westpac.

The dollar index , which measures the safe-haven dollar against six peers, rose 0.4%. It has been undermined lately by falling U.S. bond yields as markets wager the Federal Reserve can be less aggressive in hiking rates.

ENERGY PRICE RALLY
Oil prices rose on Wednesday, extending the previous session’s gains, driven by optimism that the lifting of China’s strict COVID-19 curbs will lead to a recovery in fuel demand in the world’s top oil importer.

In less than three weeks of 2023, foreign buying of Chinese stocks has exceeded last year’s total as investors bet on the country’s rapid recovery after COVID-19 lockdowns were lifted.

China’s Vice Premier Liu He said he welcomed foreign investment and declared his country open to the world after three years of pandemic isolation.

Data on Tuesday showed China’s economic growth had slumped in 2022 to 3.0% – the weakest rate in nearly half a century. 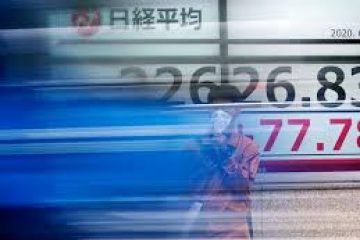