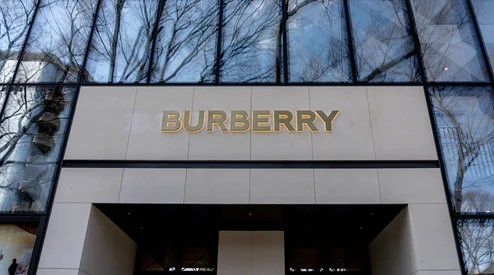 The second-quarter performance lifted first-half revenue to 1.35 billion pounds ($1.61 billion), up 5% in constant exchange rates and just ahead of forecasts, while adjusted operating profit rose 6% to 238 million pounds

Chief Executive Jonathan Akeroyd also presented his plan to drive growth alongside the results, including a target to broadly double sales of leather goods, shoes and women’s ready to wear, and grow outerwear by around 50% in the medium term.

Under the creative direction of its new designer Daniel Lee, Burberry would “refocus on Britishness”, it said.

“Burberry has an extraordinary legacy, a unique British heritage and a very strong platform to build on, as shown in our half-year results,” Akeroyd said on Thursday.

“Our focus in this next phase is on growth and acceleration,” he said, adding that the brand’s long-term ambition was to achieve sales of 5 billion pounds.

The company, known for its camel, red and black check, said it maintained its near-term guidance. It had targeted high-single digit revenue growth and a margin of around 20%.

Comparable store sales in mainland China, Burberry’s biggest single market, stabilised in the second quarter after falling 35% in the first, it said, despite some local COVID lockdowns in September.

Europe continued to perform strongly, it said, with sales up 25% in the second quarter, boosted by a rise in tourists from the United States, the Middle East and locations in Asia outside mainland China.

The Americas continued to be a weak spot, however, with sales in second quarter down 3%, reflecting some pressure in the entry level items and U.S. customers spending more in Europe rather than at home.