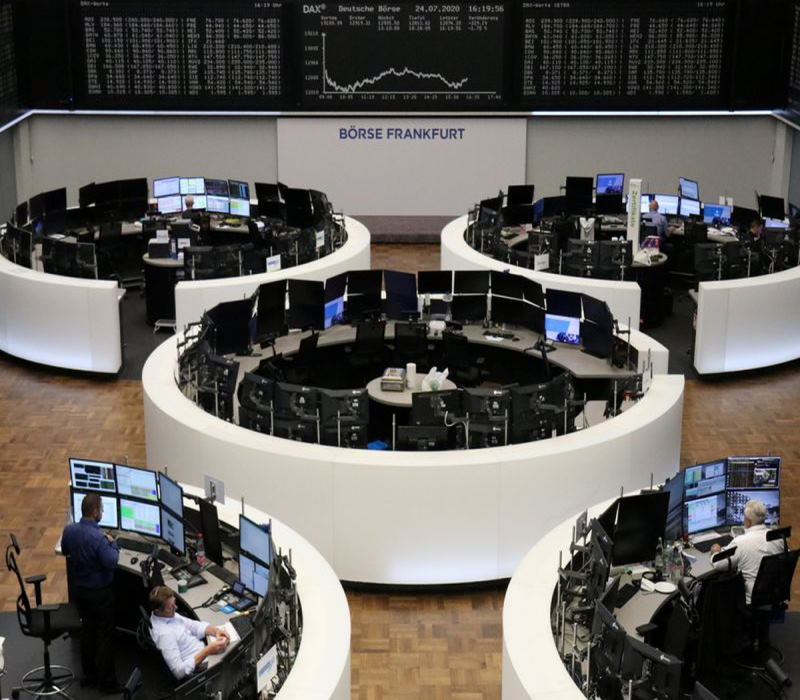 World shares slid to a two-week low on Thursday, and oil steadied after another heavy fall, as a surge in global COVID-19 cases and fractious U.S. stimulus talks kept financial markets cautious.

Europe’s early equity falls were their fourth in a row, while a disappointing German consumer morale survey also meant it was the first dip of the week for the high-flying euro.

The continent has seen the number of coronavirus cases surge to a record high, with Spain becoming the first Western European country to exceed 1 million infections and France, Britain and Italy all setting record increases recently.

“In the summer we were in the eye of the storm, I think,” said Rabobank strategist Piotr Matys, likening the drop in COVID-19 cases to the lull that occurs in the middle of hurricanes.

“Some governments assumed the worst was over… but now the invisible enemy is hitting even harder and I am worried about the fragile economic recovery.”

Sentiment was also being buffeted after U.S. President Donald Trump accused rival Democrats on Wednesday of being unwilling to craft an acceptable compromise on fresh stimulus, following reports of progress earlier in the day.

It remains unclear whether negotiations will continue ahead of the U.S. presidential and congressional elections on Nov. 3.

“We still think that this deal will remain elusive in the sense that this amount that we are talking about, $1.88 trillion, that’s about 9% of GDP, said Carlos Casanova, a senior economist at Union Bancaire Privee (UBP) in Hong Kong.

Speaker Nancy Pelosi’s package is even higher at around 10% of GDP.

“Even if both sides do manage to reach an agreement, given the tight deadline ahead of the election it’s unlikely that something like that would be able to go through the Senate smoothly,” said Casanova.

But against a basket of major peers the dollar appeared relatively unaffected by setbacks to stimulus talks, steadying after touching a seven-week low to trade slightly higher at 92.736.

Uncertainty over the passage of a bill to stimulate a pandemic-ravaged economy comes as the United States also faces a new wave of COVID-19 cases.

Nearly two-thirds of U.S. states were in a danger zone of coronavirus spread and six, including election battleground Wisconsin, reported a record one-day increase in COVID-19 deaths on Wednesday.

“The focus is absolutely on how a decisive win in this election can unlock fiscal stimulus,” J.P. Morgan Asset Management global market strategist Hugh Gimber said, cautioning however that investors needed to treat next month’s U.S. vote carefully.