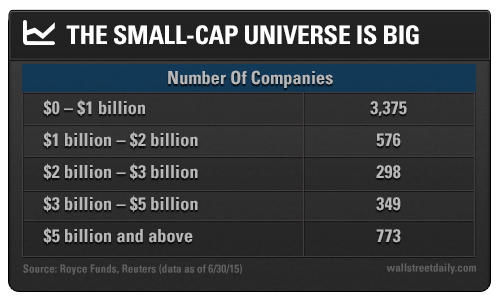 One month ago, I predicted that small-cap stocks were “poised to rally.”

I cited the easing of the Greek crisis and the fact that small-cap companies derive most of their revenue from the United States (and therefore aren’t as exposed to international troubles) as key reasons.

So was I wrong or just too early?

I’m not ready to dig into a slice of humble pie yet.

The Dog Days of Summer

One reason why a small-cap rally is taking longer than expected to kick in can be attributed to a seasonal slowdown for the stock market in general.

Trading volume is traditionally lightest during the summer months. In fact, over the last 15 years, trading volume in July and August on major U.S. exchanges has declined between 5% and 10%, according to Credit Suisse. Heck, last August, we saw a slump of over 15%.

This isn’t just a U.S. phenomenon, either. It’s global.

While they’re out of town, institutional investors are frequently away from their trading screens, which keeps them out of the market.

Meanwhile, the guys who are working don’t want to be the only investors, so they stay out of the market, too.

“As volumes are usually lighter in the summer months, you don’t want to be caught in a stock with light volume,” says JC O’Hara, Chief Market Technician at FBN Securities.

The good news? The situation is temporary.

So we’ve got that going for us. But it’s not the only thing…

Aside from buyers returning imminently, the stage is set for small-cap stocks to thrive because of U.S. GDP growth.

As you know, the U.S. economy put in a sluggish performance in the first quarter of the year, with growth trickling in at a measly 0.6%.

But it rebounded well in the second quarter, with GDP growth hitting 2.3%. And based on that, the consensus is for the economy to accelerate over the second half of the year.

This bodes well for U.S. small-cap companies, given that the average firm counts on the domestic market for 80% or more of its annual sales.

With an economic uptick coming, and small-cap businesses highly levered to the U.S. economy, their fortunes – and, in turn, their share prices – should rise accordingly.

So why should you care about any of this? Well, it couldn’t be more straightforward…

Three Reasons Why I Always Bet Big on Small Caps

My personal investment portfolio is always overweighted to small caps. Why?

Forget what they tell you in academia. The efficient market hypothesis is total junk science. Especially when it comes to small caps.

In fact, the largest amount of inefficiency exists in small caps. That’s because 80% of Wall Street analysts spend all of their time researching large-cap companies. They almost completely neglect small caps.

Case in point: At any given time, the average large-cap company has almost two dozen analysts covering it. Meanwhile, the average small cap only has about five. And at least 20% of small caps have absolutely no analyst coverage.

If we’re willing to take the time to do real due diligence, we can gain an informational advantage and leverage it for above-average profits.

When it comes to finding the most attractive investments, it helps to have more choices. And simply put, there are way more small caps than other companies.

At the end of the second quarter, there were 3,951 U.S. small-cap stocks, defined by market capitalizations of $ 2 billion or less. That compares to 1,420 mid- and large-cap stocks.

The last reason why I always overweight small caps in my portfolio is the most important: Because they historically perform best!

The small-cap advantage applies across geographies, too, as evidenced by this recent research from Lazard Asset Management.

The greater returns of small caps over large caps are too consistent to be dismissed. The outperformance ranges from 2% to 5% per year. Compounded over time, that’s significant. 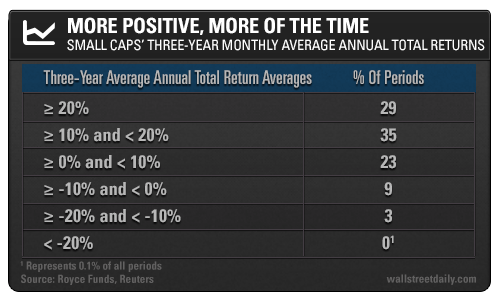 In the modern era, small caps have delivered positive returns 87% of the time, based on three-year average annual total returns. And they’ve delivered double-digit returns 64% of the time.

Bottom line: Betting big on small caps pays off because they offer the best risk versus reward potential to everyday investors. I fully expect that to be the case in the months ahead. Invest accordingly.

P.S. So what exactly is the best way to invest in small-cap stocks? How do you identify the best ones, while dodging the bombs? Well, I’ve just embarked on a FREE four-day training event that will give you everything you need to know about how to invest early in the next big tech superstars.

Join me for this training, and I’ll give you the details. Specifically, the secret behind “Indicator X” – the best way to get rich with small-cap stocks.

Part 1 of the training went live at 9:00AM yesterday, with Part 2 coming at 9:00AM this morning. The final two sessions will air at 9:00AM on Wednesday and 9:00AM on Thursday – where we’ll reveal how this indicator will make some folks very rich.

Check out this link to sign up. It’s free for Wall Street Dailyreaders.

A former Wall Street consultant, Louis Basenese helped direct over $ 1 billion in institutional capital before co-founding Wall Street Daily, where he served as Chief Investment Strategist. Louis’ tenure at the helm of Wall Street Daily was highlighted by a seemingly endless series of double- and triple-digit winners for subscribers. Learn More >>