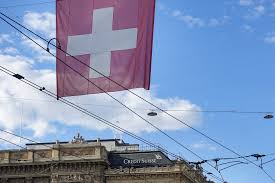 Star bankers are routinely subjected to rough treatment when they jump ship to a rival. Shackled by non-compete agreements, they are often exiled to gardening leave for months on end, and kept at arms’ length from former staffers and clients.

But Credit Suisse took the standard war-on-talent play book to a whole new level when it hired private investigators to tail Iqbal Khan, the Swiss bank’s former wealth management chief, fearing he might be poaching talent and stealing business leads in the days leading up to starting a new job across town at UBS Group AG, in Zurich. The move backfired in spectacular and tragic fashion with the death of a private investigator, the ouster of a top-ranked Credit Suisse official—the CEO’s top lieutenant—and the bank’s reputation in tatters.

“This story has everything of a Le Carré thriller—even more,” says Lukas Hässig, the Zurich-based journalist who broke many of the early scoops about the Khan affair on his blog, InsideParadeplatz.ch, before the matter caught the attention of the world’s business press.

On Monday, InsideParadeplatz.ch reported that a private investigator hired by Credit Suisse to surveil Khan had killed himself in an apparent suicide last week. This followed an incident that reportedly occurred on September 17 on the streets of Zurich in which Khan, realizing he was being tailed, confronted the investigator face-to-face, blowing the investigator’s cover.

“The reputational damage for CS is huge,” Hässig continues in an email interview with Fortune. “They underestimated the potential of this story massively. Now their reaction is too little, too late. CEO [Tidjane] Thiam has lost his credibility.”

On Tuesday morning, at a contrite press conference in Zurich, the Credit Suisse board was doing everything in its power to preserve its once sterling reputation and protect its chief executive. It laid out the findings of its own investigation, exonerating Thiam of any wrongdoing and throwing full blame on his right-hand man, the bank’s chief operating officer Pierre-Olivier Bouée.

“In my view, and in the view of board of directors, to order the probe was inappropriate,” said Credit Suisse chairman Rohner at the press conference. The measure, he added, “was disproportionate” and “did not meet the standards” of the bank.

Bouée’s resignation follows a hastily organized internal bank investigation. The CS board began looking into the matter last month, the bank said, around the time the Bouée-led private investigation into Khan fell apart and local news coverage around the matter took off.

Roher took a shot at some of that media coverage on Tuesday in defense of Thiam. “We strongly reject any and all assertions made over the last days that call into question the personal and professional integrity of our CEO,” Roher said. “He continues to have the full trust and backing of the board of directors and of myself personally.”

But the chairman admitted the heavy-handed tactics to surveil Khan will have a lingering impact on the company. “The reputation of our bank has suffered over the past few days,” he noted contritely, adding that it could even spread “to the entire financial center of Switzerland.”

The announcement of the board’s findings hardly closes the book on the Khan case. Swiss police are investigating the matter as well. A labor attorney in Zurich who wished to remain anonymous for concern it would hurt his and his firm’s business prospects with the banks told Fortune that development did not bode well for Credit Suisse.

He explained that Swiss data protection laws have been bolstered in recent years, and that courts often side on behalf of employers when an employer uses so-called “disproportionate measures” to investigate current or former employees—despite what signed non-compete and non-disclosure agreements might say.

“Shadowing somebody is considered a very severe infringement of one’s personal rights,” the attorney said. Khan, he added, may have a strong claim.

Zurich, one of Europe’s banking capitals, sees a lot of contract disputes among the elites of finance. But the Khan case is already the talk of the town. “I’m not saying this has never been done,” the attorney added. “But it’s over the top.”

—WeWork IPO filing withdrawn as roadshow leads to a dead end
—What’s the difference between a recession and a depression? Here’s what history tells us
—Charles Schwab on the lessons he’s learned over a lifetime of investing
—The 5 most valuable unicorns, according to their latest funding rounds
—“Performance chasing”—and why it can be perilous for your portfolio