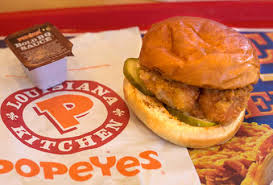 There’s been a frenzy over Popeyes’s chicken sandwiches. Now the craze is spilling over to its bonds.

Restaurant Brands International, the owner of Popeyes, sold $ 750 million of debt Friday in an upsized deal at some of the cheapest rates ever for a junk-rated bond, according to people with knowledge of the matter who asked not to be identified because the information is private. The 3.875% yield is the lowest for securities maturing in eight years or more in the U.S. high-yield market since at least 2014, according to data compiled by Bloomberg.

“This is a good data point for just how stretched the search for yield is globally,” said John McClain, a high-yield portfolio manager at Diamond Hill Capital Management. “Every stone has been overturned.”

The price underscores how hungry investors are to get their hands on higher paying securities, especially ones with BB ratings that carry less risk than the most speculative of junk bonds. Earlier this week another food-related seller, Yum! Brands, priced $ 800 million of debt in an upsized deal to pay 4.75%. Those bonds are now quoted at about 102 cents on the dollar.

Popeyes sold out of its famous chicken sandwich in late August—just two weeks after its launch—as crowds descended on its stores, eager to try a menu item that had become a social-media sensation.