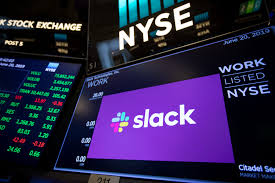 Bull vs. Bear: Can Slack Fend Off Microsoft and Recover from its Post-Listing Slump?

Since coming to the public markets in the second major direct listing in recent years (following Spotify’s in 2018), Slack Technologies’ stock has had a rocky start. And after closing at $ 31 and reporting 2nd quarter earnings Wednesday, its stock plummeted over 15% in after-hours trading.

Back in June, the workplace software went public via a somewhat unusual direct listing. The stock (ticker: WORK) began trading high above its $ 26 reference price at over $ 38 per share, however, since it has since fallen 20%.

The software-as-a-service (SaaS) company started out strong, impressing Silicon Valley with a high growth rate. That has since tapered, with this fiscal year’s guidance at 51% revenue growth (down from 82% last year). While Slack reported 2nd quarter earnings of $ 145 million (beating expectations), the company posted losses of 14 cents per share.

But Slack’s ubiquity in many modern workplaces and promising gross margins have many investors bullish. Still, profitability is likely a long way off. And big competition comes à la software heavy hitter Microsoft (who released a comparable service in 2017 called Microsoft Teams, and already has more daily active users than Slack despite launching nearly 4 years after). Can Slack compete among the software giants? Here is the Bull vs. Bear case.

Analyst Rishi Jaluria at D.A. Davidson covers Slack and 26 other companies, and currently has a ‘neutral’ rating on the company with a price target of $ 31 per share.

Microsoft Teams put out some pretty impressive numbers [of 13 million daily active users]. Slack gives this great metric that the average Slack user uses Slack 90 minutes every workday. I would bet money that you’re not going to get a number close to that from Microsoft Teams.

Slack has certain features that meaningfully differentiate it from Microsoft Teams. You do have this unique feature that Slack has [called] shared channels. It’s still in beta, [but as of] yesterday, 20% [of paid users used shared channels], so that is a great metric. The last [point] is the potential for Slack to become a platform where people actually build on top of Slack their own applications. There are actual, independent software companies that are based on Slack. That is a unique feature of Slack that you don’t have on Teams, and we’re seeing that trend in the right direction as well. Usage of the platform and the applications built on there is growing. That tells me this is a meaningful differentiated product, and the threat from Microsoft is probably overblown.

Slack put up revenue numbers this quarter that were above the high end of their prior guidance, and that’s in spite of that $ 8 million or so headwind [due to outages, when servers were down or not functioning normally]. That was not baked into their guidance—the fact that they’d have that much in credits because of the outage. Clearly, they’re guiding very conservatively. Optics around the deceleration [of revenue growth] is another reason why the stock is trading down so sharply, but it is really important that this was a one-time-ish factor with the credits. If you look at the history of Slack’s uptime [when the software is operating normally], on a quarterly basis, this is the only time I can see that they’ve had below [99.99%] of uptime.

Enterprise has very much been their focus. There’s only a couple hundred customers that are responsible for more than 40% of their revenue. I think it’s a positive sign. These larger customers [are paying] more than $ 100,000. That shows that this is a proper enterprise software company, it’s not just a startup-focused company, so I would expect that to continue. I think the 100,000 user metrics is a really important metric to demonstrate the enterprise traction they’re getting.

Stepping back, we like Slack for its near-ubiquitous nature, rapid growth, secular tailwinds, and large market opportunity, and our due diligence is very positive. WORK reported solid [2nd quarter] results, above consensus. In addition, we view guidance as conservative and believe there could be meaningful upside to numbers. The other key points we highlight are continued enterprise traction, evidence of growth outside of technology, and upside in net retention rates.

Analyst Dan Romanoff at Morningstar covers Slack and 8 other companies, and currently has a ‘sell’ rating according to Bloomberg data, with a price target of $ 14 per share.

Slack reported [2nd quarter] results ahead of my numbers. I generally have a positive outlook for them in the near term. The real problem for us arises in that we struggled to find a reason to support a strong competitive position for Slack.

Our position is that they don’t have a moat established yet, and that impacts the valuation pretty dramatically. In the case of no moat, you’re saying that we’re not really confident that they’re going to generate strong returns at all.

Formidable competition from Microsoft’s recent Teams release leads us to assign Slack a no-moat rating, while the lofty valuation prevents us from recommending the stock.

We believe there are two related controversies surrounding the stock: how rapidly the user base will grow and how long robust growth can continue. Because we do not believe the company possesses an economic moat, we anticipate competitive responses and pricing pressure in the long term that may limit Slack’s ability to generate outstanding long-term revenue growth.

We wonder if relatively high gross margins will contract due to a hypothetical competitive response from Slack as it relates to Microsoft Teams being included at no additional cost in Office 365.

They didn’t do themselves any favors by not saying what their daily active users were. All that really does is if you are bearish on Slack because of the Microsoft concern, that just fuels the fire, because now you’re wondering, well, what is the number? Is it not good and that’s why they’re not telling us? That’s going to work against them until they report a number, and I suspect when they report a number it will be reasonably good. A lot of their issues are a little bit self-inflicted because its their first quarter as a public company and they’re going through it all for the first time.

We assign Slack a very high fair value uncertainty rating. The company generally trades at high multiples relative to peers. While the company is expected to produce revenue growth at the high end of peers and the premium may be justified, higher absolute valuation levels offer less room for missteps and therefore carry greater inherent risks, in our opinion.

We are concerned beyond the next several years because the company does not have a second product to outsell to its customer based which could be a limiting factor on long-term growth. We do not expect GAAP operating margin to reach break-even within the next four years.