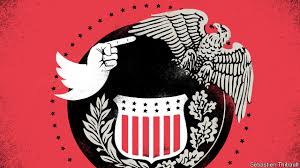 AS THE ANNUAL meeting of central bankers and economists at Jackson Hole, a mountain resort in Wyoming, began on August 23rd, two participants made a bet. Would President Donald Trump tweet about the opening remarks of Jerome Powell, the chairman of the Federal Reserve, within 45 minutes? In the event, it took the president 57 minutes. That night the victor enjoyed his winnings—a glass of whiskey—in the bar.

Mr Trump’s words made the conference theme, “challenges for monetary policy”, uncomfortably timely. He called Mr Powell an “enemy” and promised to ramp up trade tensions with China. Then he announced increases in tariff rates on over $ 500bn of Chinese imports. But even as stockmarkets reeled, the conference continued serenely. Indeed, Mr Trump even brought the assembled economists and monetary policymakers closer together.

Most obviously, they were united in grumbling about the impact of his trade policy on the global economy. Philip Lowe, the governor of the Reserve Bank of Australia, said that business uncertainty was turning political shocks into economic ones. Mark Carney, the governor of the Bank of England, said that trade tensions had raised risk premiums, thus tightening financial conditions. The president’s twitter tirade could lead to greater policy convergence, too. Mr Powell said that the Fed’s doveish shift had helped secure a positive outlook for inflation and employment. As recently as December it was raising rates away from those set by other central banks; now it is moving downwards with them.

Participants also seemed united in scepticism that monetary policy could entirely offset the trade war’s ill effects. It could help with confidence, said Mr Powell, but could not create a “settled rulebook for international trade”. Mr Lowe questioned how much modest interest-rate cuts would stimulate investment, and noted that countries could not all pep up their economies with currency depreciation, as “we trade with one another, not with Mars”.

The academic presentations revealed another point of sympathy. Mr Trump is a powerful force outside the Fed’s control—one it cannot fully offset. In claiming to put America first, he complicates the Fed’s task of keeping America’s economy on an even keel. That difficulty is paralleled by how the Fed, in turn, complicates monetary policy in the rest of the world.

Mr Trump’s power is expressed via social media. The Fed’s is exerted via the dollar, which has become more important globally in the decade since the financial crisis. America accounts for just 15% of global GDP and 10% of global trade, yet the greenback is used for half of global trade invoicing, two-thirds of emerging-market external debt and two-thirds of official foreign-exchange reserves.

Fed policy thus has far-reaching effects. Participants at Jackson Hole referred to the work of Gita Gopinath of the IMF, which showed that the dollar’s dominance in trade invoicing may stop economies from adjusting to external shocks by as much as traditional models suggest. They also heard about the findings of Arvind Krishnamurthy and Hanno Lustig of Stanford University, showing that when the Fed raises interest rates, the premium for buying the world’s safest asset—dollar-denominated American government debt—rises too. That, they think, is because the Fed is, in effect, signalling that a reduction in supply is imminent. Wenxin Du of the University of Chicago suggested that the premium could also reflect limits on global banks’ ability to lend in dollars, and that tighter Fed policy could exacerbate those constraints.

That discussion built on earlier work by another participant, Hélène Rey of London Business School, who has argued that when the Fed raises interest rates financial conditions tighten in the rest of the world. Sebnem Kalemli-Ozcan of the University of Maryland explained how emerging markets could be hit as, when the Fed raises rates, some money moves from emerging markets towards America. Investors then worry that emerging markets might run into problems, which makes them look riskier and worsens capital flight. Central banks, she added, would be unable to shield their economies fully from the consequences. In theory they could lean against the wind, raising rates to encourage investors to stay. But the tightening required tends to be so extreme that it would throttle the domestic economy. Though allowing the exchange rate to adjust instead also brings pain, it is the less bad option.

The assembled central bankers uttered a chorus of complaints about the forces making their lives harder. Amir Yaron, the governor of the Bank of Israel, spoke of keeping interest rates very low for the past three years, but still seeing foreign capital slosh in as the Fed tightened, because investors regarded Israel as an emerging-market haven. The Fed’s moves were offset only partially by Israel’s monetary policy, he said. Participants from advanced economies also grumbled: Mr Carney called the dollar “domineering”.

Sauce for the central banker

In some ways, then, the Fed’s struggles to cope with the consequences of Mr Trump’s words and deeds echo the experiences of its counterparts in other countries, for which it is the Fed itself that is the unruly, unbiddable external force. But in other ways the comparison is unfair. The Fed is, after all, seeking to create the conditions for America’s economy to thrive. The more it succeeds, the better for everyone else. And sometimes it considers the spillover effects of its actions. Its decision in July to cut interest rates was motivated in part by concerns over “weak global growth”.

On August 27th Bill Dudley, a former president of the New York Fed, suggested in an opinion piece for Bloomberg that the Fed should not ease monetary policy in response to the trade war in case it emboldened Mr Trump’s protectionism and boosted his chances of re-election. It responded with a statement slapping down any idea that it had such political motives. America’s monetary policymakers certainly create problems for their counterparts elsewhere. But, unlike Mr Trump, they are not trying to. ■