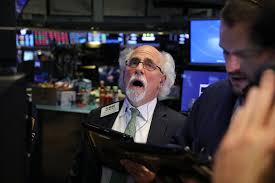 Why Volatility is Starting to Plague Many Asset Classes, Not Just Stocks

On Wednesday, Aug. 14, the market saw a big loss—800 points for the Dow alone. By the end of week, things were mostly recovered. Now, back down a bit.

Volatility in the stock market no longer comes as much of a surprise to investors, but here is a surprise: nearly every type of investment has become more volatile recently. That’s unusual, some market watcher say, and it’s not a good sign.

Monday saw a Chicago Board of Options Exchange (CBOE) VIX rating—a measure of S&P 500 stock price volatility nicknamed the “fear index”—of 16.9. That translates into an expected price variation of plus or minus 4.9% over the next 30 days. That score is down from 24.6 on August 5, the highest value of the rating since December 2018, when stocks were thrashing and climaxed in the big Christmas Eve tumble.

The CBOE 10-year Treasury volatility index—a similar measure for bonds—is at a high point since January 2017. Crude oil volatility is above the rates for 2017 and 2018 up until fluctuations spiked in November and December of last year. Also add foreign exchange rates and credit spreads between investment grade and higher-risk corporate bonds as areas of big fluctuation.

“It’s this whole quest for yield, finding a lot of investment capital flowing in the US in bonds and other parts of the credit spectrum,” said Tony Bedikian, head of global markets at Citizens Bank.

In fixed income investment, at least. Other types of market volatility have reacted to different sets of stimuli.

Oil is “at risk to geopolitical issues, threats of stability, and all that,” said Mayra Rodriguez Valladares, a risk management consultant to banks. Then there is China, which has been buying and stockpiling oil, although no one outside of the country knows for certain how what those moves will have on global price stability.

The U.S. has become the world’s largest oil producer, although the profitability depends greatly on global prices not dropping too low because of the economics of shale oil and fracking, an expensive process. “What worries me there is the whole fracking revolution, many of those deals were done with lots and lots of leverage,” Valladares said. A shift in pricing and many smaller companies could find themselves out of business, along with the people working for them.

Major geopolitical forces are also coming into play. The U.S.-China trade war casts a long shadow over everything because it involves the largest economies in the world and the unpredictability of the Trump administration’s plans. China as a producer and consumer is important. How will its economy fare and how does that affect everyone else?

“We don’t know how long this trade war will last,” said Dr. Hernan Moscoso Boedo, assistant professor of economics with the University of Cincinnati. “We don’t have a deadline. Until we know what happens, we wait it out. That’s not a good thing for economics. You can have high levels of uncertainty and not go into a recession, but it could also cause a recession.”

There are additional complicating factors. Each type of asset is experiencing its own level of volatility. A collection of them can be a like a set of roller coasters going up and down with the chance of a crash always near.

An example is Danish pension funds that are buying mortgage bonds with negative interest rates. The funds will lose money on the 10-year, -0.5% rate deals, investing money in specific mortgages rather than groups of them. An alternative could be the wavering but generally low rates of U.S. Treasury bonds.

But rapid changes in foreign currency exchanges complicate matters. Right now the dollar is strong. Should that change over the next 10 years, a bond paying around 2% might not overcome a 4% or greater shift in exchange rates. That’s how much the value of the Danish krone dropped compared to the dollar in just a couple of recent months.

“Any time we talk about any market, the reason why it does well is because people are feeling good about it,” said Giacomo Santangelo, a senior lecturer in economics at Fordham University. “When you see volatility, it’s because there is uncertainty. The up and the down and the up and the down is because everyone disagrees.”

The uncertainty becomes a heavy weight. “If you’re a CFO or treasurer in corporate America, the uncertainty of what’s going to happen … [makes it] hard to plan,” said Jim Schaeffer, deputy chief investment officer of Aegon Asset Management.

The coming presidential election only adds to the anxiety. “I’m going to build a manufacturing site to be up in one-and-a-half or two years,” Schaeffer said. But there is no way to know who will be in power or what policies will be.

Or, even worse, Trump tweets and sends everything into a tailspin. “One tweet can change everything, from risk on to risk off to equity markets up 500 or down 500,” Schaeffer said.

So, companies wait, again, and the economy continues to slow.