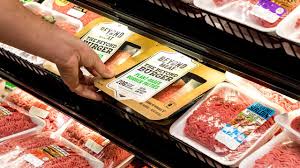 Is there such a thing as too much Beyond Meat?

The plant-based meat company announced Monday they will be offering 250,000 new shares in addition to 3 million existing shares that will be released to the public float. The company went public in May, issuing over 9 million shares at $ 25 per share (which then skyrocketed to begin trading at $ 46).

Some of Beyond Meat’s biggest shareholders, including venture capital firms Kleiner Perkins Caufield & Byers and Obvious Ventures, are selling. The two plan to sell parts of their stake, selling almost 705,000 of Kleiner’s 7.75 million shares and over 405,000 of Obvious’ 4.46 million respectively, if both firms exercise their rights.

What should investors make of this?

“The biggest thing is, do you pass the ‘smell test,’ so to speak,” says Santosh Rao, head of research at Manhattan Venture Partners. “Are they selling because they think it’s maxed out and there’s no more upside? Or are they selling because they’re early stage guys?… They’ve been there for 9, 10 years.” Rao suggests that VC funds may be matured and want to get a return to “recycle the money into new investments.” He believes the follow-on isn’t a negative thing. “They can use that money, they need it,” Rao says of Beyond Meat. “If you have to do this, this is the time.”

The last tech company to do a secondary offering less than three months after their IPO was Splunk in 2012, according to FactSet data.

Rao thinks Beyond’s issuing is tied to balancing supply and demand in the market and allowing matured shareholders to cash in. The company says it wants to use the funds raised from the offering to bolster production and supply—something essential to compete in the heating-up space.

Though investors sold the stock on the news of the secondary offering, the plant-based meat company actually reported stronger-than-expected revenues of $ 67.3 million (versus $ 52.7 million estimates), and even raised full-year revenue guidance.

“The primary concern of a follow-on offering at this stage so soon after the IPO is that it indicates a concern by current investors—and that they would like to take their gains now,” Coye Nokes of OC&C Strategy Consultants, who specializes in the retail and consumer space, told Fortune in a note.

Others like Robert Johnson, chairman and CEO of Economic Index Associates, thinks Beyond wants to capitalize on the hype around their stock now. He told Fortune in a note that “much of the stock price appears to be driven by FOMO,” and that Beyond should “strike while the iron is hot and it likely is not going to get much hotter than this.”

Valuation does appear to be a concern for some. Bernstein analyst Alexia Howard writes that the firm remains “on the sidelines as valuation appears stretched …, implying limited upside potential from a valuation perspective.” And while Bernstein raised their price target for the company to $ 172 from $ 123 per share, Howard wonders if Beyond “can continue to deliver positive news that surprises to the upside.”

“A sale of that size in the open market would likely increase volatility and encourage the speculation and short selling in the market,” Nokes says.

Given the stock’s low supply and astronomical market cap, borrowing fees for shorts are steep. According to S3, Beyond Meat borrow fees hit 150% for new borrows on Monday. And since its stock has since recovered somewhat throughout the day, Roa says Beyond short sellers should beware.

“The stock is back up now, so I’m sure they’re getting squeezed,” Rao says, referring to a situation where stock prices increase and put pressure on short-seller’s positions. “When you have such a big short interest, it works both ways. Any good news and the stock going up, all these guys are getting squeezed, and they will come back and drive the stock even higher.” Even S3’s head of research Ihor Dusaniwsky warned in a note that “a BYND short squeeze is still looming on the horizon.”

J.P. Morgan remains neutral on the company, especially in relation to the risk short sellers incur.

“With (a) short interest still hovering around 50% of the float at last measure (well above the group average of 6.8%), … and [3rd quarter] likely to impress, we still view being negative on the stock as a risky proposition right now,” according to the firm’s note.