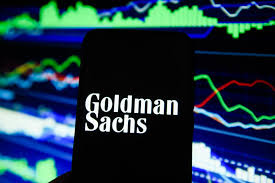 Investors Give Goldman a Thumbs Up for Going Down Market

Citigroup, J.P. Morgan Chase, Wells Fargo, Bank of America, and Morgan Stanley—kicked off earnings season reporting last week. But even as they beat Wall Street’s expectations, investors, who remembered that the economic cycle might be losing steam, yawned. Except for Goldman Sachs, which saw a close to 2% share price bump.

Investors liked what they saw in early results from Goldman’s expanding range of consumer products, and gave a thumbs up to a company that is acting at times more like a tech-driven challenger bank startup than a 150-year-old institution.

Though still thought of as an elite investment bank, “We have embraced our status as a bank,” notes Heather Miner, head of investor relations at Goldman. “It’s an idiosyncratic story in the banking industry where they’re undergoing a substantial transformation,” noted Devin Ryan, managing director at JMP Securities.

Goldman’s transition is a direct result of the financial crisis of 2008—which threw a bucket of cold water in the face of Wall Street and Main Street. Confidence in the old-line Wall Street firms had shattered, along with their financial stability. Bank of America bought Merrill Lynch, J.P. Morgan swallowed Bear Stearns, and Lehman Brothers went bankrupt. Commercial banking offered a chance to diversify and cut risk.

The shift happened in an “abrupt” move, as Miner put it, the third weekend of September 2008, when Goldman, as well as Morgan Stanley, requested and received a federal bank charter, a status their competitors already had. As such, these institutions no longer had the freedom to indulge in the complex financial interests that helped create and extend the financial meltdown. But the move provided access to liquidity loans from the Fed, if necessary, and opened other doors as well. In 2016, Goldman launched its online Marcus banking service.

“[We] launched initially with a loan product but very quickly saw the immediate value is more on the deposit side than the asset side,” Miner said. Indeed, deposits offer stability and reach. The more money on deposit, the more an institution can lend and profit from collecting interest and fees. Goldman Sachs currently has a total of $ 166 billion on deposit.

In the world of big banks, that ranks 14th according to the latest available FDIC data. Leading the list were Bank of America and J.P. Morgan, each with more than $ 1.3 trillion, and Wells Fargo showing close to that figure. Next step down was Citigroup, with $ 510.2 billion.

But there is advantage in being a smaller player with massive resources: greater ease than giant competitors to achieve the comparative growth investors demand. Out of the $ 166 billion Goldman has, $ 50 billion is consumer deposits that have doubled since 2018. That lights the fire in investors’ eyes.

“Goldman wants to get a bigger share of the deposit dollar,” said Chris Marinac, director of research at Janney Montgomery Scott. But the desire raises questions. “What will Goldman do for them? Are they going to pay them more? Or will they have folks on the ground for better service? Banks have to do both. The question is how you manage that.”

Goldman has approached growth by segmenting markets into non-overlapping groups. They are using technology to reach a broad range of customers, and offering a personal presence for the more well-heeled.

“They’re building out their savings and loan business,” said Jackie Reeves, managing director of Bell Rock Capital. They are also co-branding a credit card with Apple, potentially a tricky market where competition is high and both Goldman and Apple are new to the market.

Marcus, said Miner, is for people who do regular business with banks and are comfortable using online access only. This is the challenger bank model. The lack of physical locations significantly cuts expenses and allows higher interest rates on deposits to attract customers: currently 2.15%, according to Goldman.

There is also an advantage in building out the depository line as relatively new business. “They don’t have operating margins to protect,” Ryan said. Because there is no existing business to cannibalize, there’s less pressure from investors to maximize revenue by minimizing rates.

Then there’s the business of managing money. The company’s personal wealth management line targets those with $ 10 million and up, with an average account size of $ 40 million. The acquisition of investment adviser United Capital Financial Partners in May 2019 brought 90 offices and 220 individual advisers aimed at people with between $ 1 million and $ 5 million in assets.

“We’re spending a lot of time building our private wealth management business, especially internationally,” Miner said. Since the 2003 acquisition of Ayco, Goldman has also been in the business of providing financial advice through corporations to top executives, serving half of Fortune 100 firms, the company says. Now it’s pushing a personal finance website for other workers to expand the reach deeper into corporations that want new benefits to help recruit and retain workers.

All the expansions have one thing in common: they’ve needed massive investment. “If they want to be a disruptor and they do, it’s going to take money,” Marinac said. “When I look at the financials today, they have fairly high operating expenses.”

“Year to date we’ve spent $ 275 million pre-tax loss, if you will,” or 60 basis points of Goldman’s return on equity, Miner said. “We said 2019 is the belly of the investment curve.” The strategy is not a novel one: spend now and hope that earnings accrue. But there are a few unknowns. Expected lower Fed rates could put downward pressure on the deposit interest Goldman can afford. An economic downturn might make investors—who “want higher returns but they don’t necessarily want higher risk,” as Marinac said—nervous.

But for now, Goldman will enjoy some of the reflected glow of fintech firms. “They had been an underperformer in 2018,” Ryan said. “In 2019, they’ve been a substantial outperformer.”