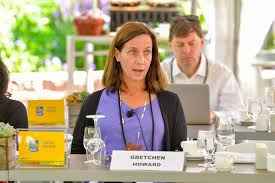 Robinhood, a stock trading app popular with millennials, caused a stir last December by announcing a no-fee checking-and-savings account that offered a 3% yield.

Days later, however, the company walked back the announcement after regulators criticized it for offering what amounted to a bank account without FDIC insurance—a backstop that protects consumers in the event a financial institution fails.

The episode came as an embarrassing misstep, but now Robinhood is preparing to try again. “We’re going to come out with a cash management account soon,” said the company’s COO, Gretchen Howard, at Fortune’s BrainstormTech conference in Aspen.

Howard also stressed the impending product is not a “bank account,” and noted that Robinhood took down its December announcement to avoid confusion. The company subsequently clarified that the new product will be a cash management feature within customers’ existing brokerage accounts rather than a stand-alone account.

More broadly, Howard said Robinhood is focused on expanding its brokerage business, noting that only quarter of millennials use a self-directed broker for investments. She added the company has also filed for a federal bank charter—a tool that would allow it to offer traditional banking products.

Robinhood, which has 6 million users and is rumored to be eyeing an IPO later this year, is just one of a crop of financial startups that are attempting to poach customers from big banks. Others include Chime, which offers no-fee debit cards services, and so-called “robo-advisers” like Wealthfront.

According to Chris Gottschalk, a senior advisor at Santander InnoVentures, these startups are gaining traction in part because of the big banks’ “massive inefficiency” at building new products. He cited the example of Zelle, the person-to-person money transfer service created by a coalition of banks. Gottschalk claims it cost the banks billions of dollars to launch Zelle compared to Venmo, a similar app used by millions of millennials, which he estimates cost “in the single digit millions” to build.

Those big banks, however, may be able to weather these inefficiencies, according to the Chief Digital Officer of Morgan Stanley’s Wealth Management service, Naureen Hassan. “Our strategy is deep pockets,” said Hassan, referring to the banks’ ample resources. She added that the banks also have an advantage in that they don’t have the same customer acquisition costs as the startups.

—A.I.’s hidden biases continue to bedevil businesses. Can they be stopped?

—How Spotify “playlisting” turned an unknown artist into a star