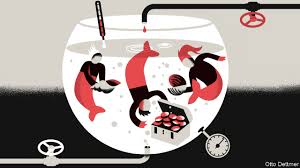 JOHN MAYNARD KEYNES once fantasised about a world of permanently low interest rates. In the final chapter of “The General Theory” he imagined an economy in which abundant available capital causes investors’ bargaining power, and hence rates, to collapse. In such a world markets would reward risk-taking and entrepreneurial talent, but not the mere accumulation of capital. The result would be the “euthanasia of the rentier”.

That low rates could feature in a leftish Utopian vision might come as a surprise today. It is commonly argued that a decade of monetary-policy stimulus has filled the pockets of the rich. Low rates and quantitative easing (QE) are said to have sent stock and bond markets soaring, thereby exacerbating wealth inequality. They have also boosted house prices, adding to intergenerational tension. A glance at financial markets suggests more of the same is coming: long-term rates have tumbled this year in anticipation of monetary easing, while stockmarkets have boomed.

Central bankers have defended their policies by arguing that, without loose money, unemployment would have been much higher, badly hurting the poor. That is true. But the effect of monetary stimulus on financial markets has nonetheless angered left and right alike. Judy Shelton, one of President Donald Trump’s new picks for the board of the Federal Reserve, has blamed central banks for “exacerbating income inequality”. She has called for a return to the gold standard. The left, meanwhile, prefers fiscal loosening such as giving money to the poor, or fiscal-monetary hybrids such as the “people’s QE” once advocated by Jeremy Corbyn, the leader of Britain’s Labour Party, under which the central bank would finance government investment.

Who is right? Do low rates spell euthanasia or euphoria for those who live off capital? And should concerns about inequality determine which policy lever to pull in a downturn?

A starting-point is that falling interest rates make all streams of future income more valuable. That includes dividends from stocks, coupons on bonds and homeowners’ privilege of being able to occupy their houses without paying rent. But the resulting increases in asset values can be captured easily only by people who are willing to change their plans. Imagine a homeowner. A higher house price is of little benefit to him if he has no desire to sell and move. Similarly, a bondholder about to retire may need the steady stream of coupon payments the bond provides. A capital gain from selling bonds today might fund a lavish around-the-world cruise, but blowing through retirement funds is unlikely to be prudent.

Now consider a penniless millennial. She sees no capital gain when low rates boost asset prices. But she does have assets that will yield income in the future: education and skills. Were this human capital valued on financial markets, it too would rise in value when interest rates fall. She too could change plans and spend more today, but by borrowing cheaply rather than selling assets.

A recent paper by Adrien Auclert of Stanford University sets out a framework for judging who wins and who loses from changes in monetary policy. Three channels must be considered. One concerns the impact of lower rates on the macroeconomy—the effect trumpeted by central banks. Another concerns the higher inflation that lower rates might cause. That hurts creditors and benefits debtors, who see the real value of their obligations shrink.

The third channel concerns asset prices. It is wrong to claim that asset-holders generally benefit when rates fall, says Mr Auclert. What matters is the full picture of an individual’s assets and liabilities. The latter he defines to include future consumption plans (such as whether the homeowner wants to stay in his house, or whether the retired person seeks to maintain a steady standard of living). Only by looking at an individual’s balance-sheet in full can you judge whether he wins or loses from low rates—or whether, in the jargon, he has “unhedged interest-rate exposure”.

The crucial question is whether someone’s assets and liabilities mature at different points in time. People with short-dated assets but long-dated liabilities—for example a saver with lots of cash in the bank to fund a purchase ten years hence—do badly when rates fall. They are the euthanised “rentiers”, who must save more to fund spending later (a rare example of lower rates depressing consumption). But those who wish to spend today and hold long-dated assets, such as long-term government bonds, do well.

What does this framework imply for rich and poor? Mr Auclert presents some evidence that Americans who are older, or whose incomes are higher, tend to be on the losing end of asset-price effects when rates fall. But he says it is hard to measure the effect precisely. A recent working paper by Panagiota Tzamourani of the Bundesbank finds that within the euro area, average unhedged interest exposure varies a lot between countries, seemingly in line with the prevalence of floating-rate mortgages. But Ms Tzamourani also finds that younger households and those with low net wealth benefit from lower rates almost everywhere.

That seems to turn conventional wisdom on its head. Far from helping the well-heeled, the changes to financial markets induced by low rates could be hurting them, just as Keynes argued. Some might object that they do not deserve the hit: surely those who save in cash for future consumption are more responsible than those who wish to borrow and spend? Keynes would have retorted that in a world awash with capital, extra saving does not benefit society. In a slump it is harmful. In any case, if fiscal stimulus is preferred to low interest rates, taxpayers would end up with debts instead.

Monetary stimulus may not help the poor as much as deficit-financed welfare or progressive tax cuts. Structural problems in the economy, such as market power, may allow the rich to earn high returns even as rates fall. But egalitarians—and those without wealth—probably need not fear doveish central banks.